Champions Cup: What teams can still qualify for quarter-finals 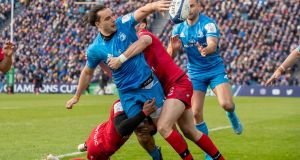 Leinster’s James Lowe offloads as he is tackled by Noa Nakaitaci and Xavier Mignot of Lyon during the Heineken Champions Cup game at the RDS. Photograph: Morgan Treacy/Inpho

Just one round of pool fixtures remain before all eyes turn towards the Six Nations and the Heineken Champions Cup is put to bed until the start of April.

Last weekend saw three of the four provinces beaten by French opposition, with Leinster the team to fly the flag as they routed Lyon 42-14 in Dublin.

Connacht’s European campaign was brief but memorable, with Saturday’s 21-7 defeat at home to four-time winners Toulouse confirming their early exit from the competition.

Ulster and Munster, meanwhile, are still alive after defeats away to Clermont Auvergne and Racing 92 respectively – although they have drastically different prospects of making it into the quarter-finals.

With the pool stages reaching a conclusion this coming weekend, here is a look at who needs what to make it into the tournament’s last eight.

Who qualifies for the quarter-finals?

A quick reminder on who makes the cut – the five pool winners, followed by the three best placed runners-up will make it into the knockout stages.

In order to separate teams from separate pools, match points are followed by points difference and then tries scored.

Are the quarter-finals seeded?

Yes – which means even the teams who have already qualified still have plenty to play for this weekend. The top four ranked group winners will receive home quarter-finals, while the top two seeds are also guaranteed a home semi-final should they reach the last four.

Here is how the quarter-finals will look:

Who can still qualify for the last-eight?

What are the final round of pool fixtures?

(All games are live on BT Sport)

How are the pools looking?

Leinster are the runaway leaders in pool one, having won all five of their matches, picking up four bonus points along the way. They are currently the top seeded side in the competition on 24 points and have the best points difference of any side (+105). Their place in the quarter-finals is guaranteed, but a home quarter-final isn’t – it’s unlikely, but they could still be overtaken by the four sides below them – Racing 92, Exeter, Toulouse and Clermont.

Leo Cullen’s side travel to play Benetton Treviso in their final pool fixture and a victory of any description will guarantee their status as top seeds, meaning a home quarter-final and potential home semi-final. If they lose but pick up two bonus points they would also secure a home quarter-final.

Elsewhere in the pool, only Northampton Saints are still alive. They can reach 19 points with a bonus-point win away to Lyon, however their inferior points difference means they are likely to need one of Ulster, Saracens or Gloucester to lose in order to progress.

Exeter are top dogs in pool two and are guaranteed a place in the quarter-finals after their 31-31 draw away to Glasgow at the weekend. They still have plenty to play for however and victory over La Rochelle at Sandy Park at the weekend will ensure they have a home quarter-final.

The Chiefs are currently third seeds (22 points, +62), and can still gain a top two seeding if they better Racing 92’s result against Saracens by 10 points. Elsewhere in the pool, Glasgow Warriors are still alive but only just – if they win away to Sale Sharks with a bonus point, and Northampton and Gloucester are both beaten in France, then they would squeeze into the top eight.

Ulster’s winning run in Europe came to an end last Saturday as they were beaten 29-13 by Clermont Auvergne in France, with the province left to rue their first-half profligacy. However, their destiny remains in their own hands and a victory at home against Bath this weekend would guarantee a place in the last eight.

A home quarter-final looks out of their grasp though – they would need Clermont to lose away to Harlequins in order to top the pool and also require Gloucester to beat Toulouse in France, as well as a huge points swing with the French giants. Lose to Bath in Belfast and Ulster can still qualify, depending on the results of those below them. Clermont, meanwhile, are in control of the pool and are pushing for a home quarter-final – if they beat Harlequins with a bonus point they could still leapfrog any of the four sides above them should they lose at the weekend.

Munster aren’t out of Europe just yet but their challenge is on life support after Sunday’s 39-22 defeat to Racing 92 in Paris. They are currently third in the pool and need Racing 92 to beat Saracens at the weekend in order to finish as runners-up. A bonus-point win over the Ospreys at Thomond Park would move them up to 16 points overall – enough for them to qualify providing Glasgow, Northampton and Gloucester all fail to win.

It’s improbable, but just about possible. Defending champions Saracens will progress if they beat Racing 92 at Allianz Park, while the French side – current second seeds – know a victory will probably be enough to secure home ties in the last eight and the last four.

Connacht’s European odyssey is over for another year. They produced two fine performances to beat Montpellier and Gloucester at home but last Saturday’s 21-7 defeat to Toulouse in Galway signalled the end of their campaign. Toulouse currently top the pool on 22 points and know a home victory against Gloucester this weekend will guarantee a home quarter-final, while potentially earn them top-two seeding. The Cherry and Whites know an improbable victory at the Stade Ernest-Wallon will secure a place in the knockout stages.