Leinster’s centre is holding thanks to fab four outhalves 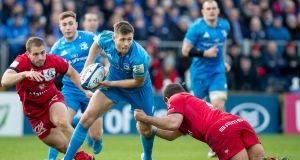 Given Leinster’s current run, you would expect them to be on top of most of the charts for scoring and offensive play in the European Champions Cup. And organisers say they are.

Who are top of the try heap? Leinster are with 26 tries. Who are turning over the scoreboard most freely? Leinster are, with Clermont, both on 181 points. Who have made the most carries? Well, Toulouse have with 748, but Leinster are in second place with 716.

The interesting part is that Leinster are not second or third or even fourth in penalty scoring. Leo Cullen’s unbeaten side sit in last place from 20 clubs with just three penalties from their five pool matches.

With four outhalves, Johnny Sexton, Ross Byrne, Ciaran Frawley and Harry Byrne, each of them different types of player, it is the Leinster style that coaches are trying to keep constant in the European Cup and Pro 14 league – at least within certain parameters.

The outhalves have been kicking for position or territory or have been putting the ball in the hands of where their backs and big runners want it to be.

“So they have to understand how they are the most valuable for the team to function, exploding their strength. You can see it.”

That has been borne out. Not compromising the Leinster system is largely how they chose to play the ball when they have possession. The number three is not a frailty associated with the place-kicking of the four pivots, but more a reflection of Leinster dominance and a strength.

In most of their matches they have had the confidence and ambition to push on for bonus tries rather than taking cheaper points. Eleven out of the 15 matches Leinster have won so far have yielded a try bonus point, as have four of their five played in Europe.

“Definitely, it’s great to have a team with that mentality to go out and play like that,” says the Leinster backs coach. “Also, if we analyse the tries we have a big variety; it’s not just backs scoring or forwards scoring, it’s a big variety and that’s where we want to get.

“If we need to score five tries from a maul, we’ll try to score them. If we have to score by counter or flowing rugby we’ll do it as well. That’s what we want to be, an unpredictable team, in terms of how you play against us.

“But for me, it’s not only about rugby and scoring tries, it’s about not conceding tries. As much as Leinster sees that part, it’s the nice part of the statistics to see how many tries we score, for me we get most of our energy from our defence. The defence is what allows us to get the ball and have the ball and then to be able to score.”

With Sexton and Joey Carbery injured and both possibly out of contention for Ireland’s first match against Scotland in less than two weeks, Ross Byrne more than any now comes into focus.

Byrne has played 192 minutes in the cup and kicked one penalty, but he has passed the ball 67 times, kicked from hand on 10 occasions and carried the ball himself 21 times. As Contepomi says, that is the Leinster system.

“Rossy is a rugby brain,” he says. “You can see it how he is looking for space and how he can find it. You saw the kick the other day when everyone was expecting him to kick to touch. He crossed it [to Dave Kearney]. Try on the other side.

Leinster are in a bubble of sorts, forwards and backs playing total rugby but without being cavalier

“Frawley is athletic. It’s unbelievable his athleticism. So he needs to exploit that, his way of running. He’s big enough. And Harry [Byrne]. He’s young now and free and likes to pass. But very good skills.

“Definitely he still has to learn a lot. But he’s getting there. We are lucky we have four good . . . well, Johnny, what can you say. He is great in what he does.”

Leinster are in a bubble of sorts, forwards and backs playing total rugby but without being cavalier. The game against Lyon away from home on a greasy pitch in the city suburbs highlighted their streetwise self-awareness. But with an average of more than five tries a match in the pool games, the centre of the Contepomi system seems to be holding.