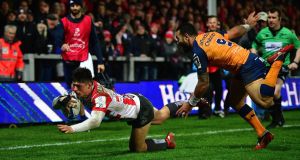 Teenager Gloucester wing Louis Rees-Zammit is in line to be named in Wales’ Six Nations squad. The 18-year-old has lit up English rugby this season, scoring nine tries in 10 games for his club.

And that blistering form has attracted Wales head coach Wayne Pivac’s attention as he prepares for Wednesday’s squad announcement.

Rees-Zammit, who was born in Penarth, has claimed six touchdowns in his last three Gloucester appearances, including a hat-trick against Northampton.

He has already been rewarded with a long-term club contract after developing at a startling pace through Gloucester’s academy, and he has spoken about his dream to represent Wales.

If he features against opening Six Nations opponents Italy in Cardiff on February 1st, he would join an elite band of 18-year-olds to play for Wales, including George North and Tom Prydie.

Rees-Zammit will turn 19 the day after that match, which will be Wales’ first Six Nations Test under Pivac and his new coaching team.

Speaking earlier this week, Gloucester head coach Johan Ackermann said: “For his young age, Louis has a very mature attitude, a willingness to work hard and a commitment to rugby.

“If he stays humble and stays hungry to improve, I have no doubt that he has an extremely promising career ahead of him.”

And Gloucester rugby director David Humphreys added: “Louis has had an amazing start to his professional rugby career.

“Not many 18-year-old academy players get an opportunity to play regular Premiership and Champions Cup, but Louis has taken his chance and become a regular member of the matchday squad over the last few months.”

While Rees-Zammit prepares for a potential first taste of the senior international environment, Pivac’s squad is also likely to include many familiar faces.

Bath number eight Taulupe Faletau is poised to return, having missed the World Cup in Japan because of a collarbone injury.

It was another cruel injury setback for the 29-year-old, who has won 72 caps, but not played Test rugby since March 2018.

It is more than two years since scrumhalf Rhys Webb pulled on a Wales shirt, having joined French giants Toulon and ruled himself out of Test selection because he did not meet the minimum 60-cap requirement required for players plying their trade outside the Principality.

Toulon recently agreed to Webb’s early release from his contract for family reasons, and he will rejoin the Ospreys next term.

He was originally eligible for Wales again from July 1st, but the Welsh Rugby Union announced that the Professional Rugby Board (PRB) had agreed to an application from Webb for a six-month dispensation, during which time Pivac can consider him.

The PRB comprises representatives from each of the five professional entities in Welsh rugby – its four regions, the Scarlets, Ospreys, Cardiff Blues and Dragons, plus the WRU – and shares responsibility for running the professional game.

Webb, if selected, would enhance already strong scrumhalf options for Pivac, given the impressive World Cup contributions made by Gareth Davies and Tomos Williams.

Pivac will be without the likes of long-term injured pair Jonathan Davies and Gareth Anscombe, while Scarlets-bound Saracens back Liam Williams has not played since suffering an ankle injury at the World Cup.

With centre Davies sidelined, there could be a recall for Rees-Zammit’s Gloucester colleague Owen Williams, who won the last of his three caps in November 2017, while uncapped Sale Sharks prop Will-Griff John is thought to be among the front-row candidates.

Ireland take on Wales at the Aviva stadium on Saturday, February 8th at 2.15pm, the same day as the general election.