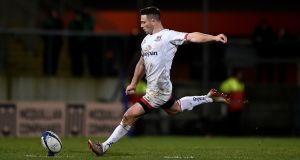 Dan McFarland has made two changes to his Ulster side for Friday night’s clash with Harlequins in London.

The province are currently looking to make it four Champions Cup wins from four, after last weekend’s tense 25-24 win in Belfast.

Jacob Stockdale started that fixture at fullback, and he retains his position, with Matt Faddes returning on the wing and Louis Ludik resuming his place in the back three.

In the pack, Eric O’Sullivan, Rob Herring and Marty Moore form the frontrow, with Kieran Treadwell returning to join Iain Henderson in the engine room.

Sean Reidy, Jordi Murphy and Marcell Coetzee keep their places in the back row.

1 Owen Doyle: Creeping professionalism of schools rugby a threat to the game
2 Champions Cup: Leinster will meet Saracens on Saturday evening
3 GAA officials and referees brace themselves as new rules kick in, and this time it's for real
4 Niall Quinn happy to step into the breach at FAI
5 Ole Gunnar Solskjær insists he is up to the challenge at United
Real news has value SUBSCRIBE