Rugby Statistics: Would it be feasible to stop the clock at scrum time? 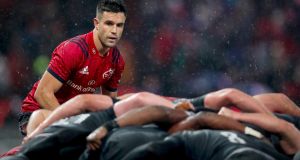 Conor Murray looks on at a scrum during Munster’s 10-3 win over Saracens. Photograph: Oisin Keniry/Inpho

Props may consider it heresy, many forwards too, but for most supporters the seemingly inordinate amount of time given up to a scrum is largely deflating when it comes to atmosphere. World Rugby has spent several years trying to streamline a process that takes a sizeable bite out of match minutes; a primary bugbear the number of re-sets and the arbitrary nature of who’s doing what to whom.

It can be a devastating attacking mechanism in its own right as a self contained entity and also an important launch pad. No one is advocating that it should be reduced to the ‘lean-to’ of rugby league but reducing the time taken to complete this particular set piece wouldn’t have too many dissenting voices.

Tom Savage, of ‘Threeredkings’ fame on twitter - mandatory follow for Munster supporters - came up with an interesting suggestion recently that the match clock should stop for scrums. It sent this column down the rabbit hole of scrums and specifically a look at Munster’s recent 10-3 Heineken Champions Cup victory over Saracens at Thomond Park.

Weather conditions for the final 50 minutes of the game were horrendous, driving rain and a gale force wind, so the natural assumption would be that there would have been more handling errors and therefore more scrums than say in Munster’s previous matches in this season’s tournament.

The short answer is not really. There were 16 scrums in the Irish province’s win over the Ospreys, 14 in the drawn game against Racing 92 and 17 in victory over Saracens at Thomond Park last weekend.

On a brief tangential note, during Ireland’s games in the 2019 Six Nations Championship there was an average of 12.4 per match involving Joe Schmidt’s side with a high of 17 against France and a low mark of eight, when England came to Dublin. There were 39 penalties or free-kicks awarded at scrum time over the course of the tournament. It’s not so long ago, 2016 to be precise, that a game between France and Ireland contained a whopping 27 scrums.

Back to the Munster match, a game in which 20 minutes and 56 seconds, a quarter of the match, were devoted to the scrum. The graphic below shows the time taken in seconds from referee Romain Poite’s whistle to the moment of the ‘feed’ from the respective scrumhalves.

Stopping a match for scrums would see the amount of time it takes to complete a game at present, edging closer and closer to the two-hour mark

Taking the overall total of 17 scrums - Munster had the put-in on 12 occasions - the average time elapsed was 73.88 seconds, although that figure does need to be qualified by a couple of other statistics. Six scrums were re-set and one was re-set twice, and the average time for those seven was 100 seconds. The other 10 scrums took 55.30 seconds on average.

Two of the three quickest scrums, the 11th and 13th of the game, took 40 and 47 seconds and what binds them together is that they came immediately after frontrow replacements were made, based on a premise that the newcomers were keen to taste the action as quickly as possible.

When it was a Saracens put-in, they took 64.60 seconds on average - it’s skewed a little but the double re-set that took 117 seconds, the average for the other four would have been 51 seconds - while Munster’s had a mean time of 78 seconds but that too requires the clarification, that six of those scrums had to be re-set: a 57.83 second average for the other six.

Another variable factor was the preamble provided by referee Poite, sometimes speaking to the respective frontrows about what he expected or reinforcing what he liked in the previous scrum. On other occasions he just let them get on with it; nothing wrong with either policy to be fair.

Stopping a match for scrums would see the amount of time it takes to complete a game at present, edging closer and closer to the two-hour mark, move appreciably beyond it. If such a mechanism had been in place at Thomond Park last Saturday, then there would have been an additional 21 minutes to get through but the main argument against the idea would centre on player welfare.

It’s not that it couldn’t be done or that there mightn’t be an appetite amongst supporters to prolong the spectacle but increasing the duration of a match by 20-minutes would place a significant additional physical toll on the players and that is the most important consideration.

World Rugby, with the assistance of referees, has been proactive in trying to tweak the scrum sequence in a bid to expedite it without losing the essence of the contest but it’ll take a fair bit more untangling to find an acceptable solution.