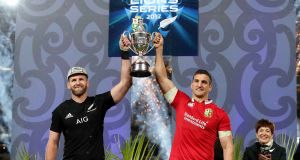 The itinerary announced last week for the Lions tour to South Africa in 2021 was to many a notice of execution. Five weeks, eight matches, just two midweek outings and no games in between the three Tests. And the Gallagher Premiership final will be played one week before the opener in Cape Town against the Stormers.

When Warren Gatland returned from the 2017 trip to New Zealand, he said he would not be tempted by another tour, worn out by media ridicule in his home country and anticipating the cut in the length of future itineraries that would make planning even more difficult and threaten a core principle of the tourists: that every player will have the chance to compete for a place in the Test side.

He changed his mind and becomes only the second coach after Ian McGeechan to lead the Lions against each of the major southern hemisphere nations. It promises to be his most demanding assignment with South Africa rejuvenated under Rassie Erasmus: he may be standing down as head coach after the World Cup success, but his hand will remain on the Springboks’ tiller.

Premiership Rugby has been identified as the main threat to the continuation of the Lions after 2021. On the surface it has a case to answer for refusing to bring forward the date of its final in 2020-21, which will be played on June 26th, days after the start of the campaign. The Pro14, which is run by the unions, rather than the teams, has shortened its season by a week.

What is seen as an aggravating factor is that the 2020-21 Premiership season is two weeks longer than the current campaign and the one in 2021-22, which both start a week later and finish a week earlier. Accommodating the Lions would not quite appear to be the “suicidal” notion Premiership Rugby said it would be last year because of the disruption it would cause to the tournament.

There is nothing in the game like the Lions, four countries coming together for the last of the old-school tours. Support for the tourists has never been greater, with more than 30,000 fans from the four home unions expected to travel to South Africa in 2021, and even though New Zealand, South Africa and Australia only host a tour every 12 years, none could afford to lose the considerable income generated.

Far from becoming an anachronism, the Lions are the lifeblood of the international game at tier one level. That the future of such a commercially lucrative vehicle is in doubt underlines the jockeying for position that remains as the professional game approaches its 25th anniversary, as well as the demands of a calendar that, in Europe at least, remains unwieldy and places onerous demands on players.

Blaming the English clubs for the lack of preparation time the Lions will have in 2021 is to ignore the problem. England and France both suffered club-country tussles before realising that nothing would be resolved without cooperation because neither side would give way in a test of strength. Decisions are now made jointly, with players’ associations also having input.

So it should be with the Lions, which is currently run by the four home unions, as it was in the amateur days when governing bodies acted autocratically. Beyond offering Premiership Rugby money for moving the date of its final, there has been no contact, even though its members are the employers of a significant percentage of the players called on every four years.

The them-and-us approach no longer works and the Lions would benefit from some joined-up thinking. Premiership Rugby should be represented on its board, along with the relevant Pro14 sides, although the Irish and Scottish teams involved in that tournament are effectively run by the unions, while the Welsh regions are more devolved then independent.

As it stands now, when Gatland is faced with close calls between English players and Pro14 players before the South Africa tour, he is very likely going to plump for the latter because they would be able to take a full part in the buildup. When the squad is announced, the top four in the Premiership will still be in the making and the finalists not known. All he should be thinking about is his strongest squad.

The clubs, who of course are paid for each player they provide to the Lions, are making sacrifices. The third Test in 2021 is on August 7th, and with the RFU and the Premiership agreeing that English players on the tour should have a 10-week break after it, it would mean they were not available until the fifth weekend of the following season, although those whose involvement ended in the final midweek match would see their 10-week period end after the opening weekend of the 2021-22 league campaign.

The clubs and the RFU have set up a tripartite panel with an independent chair to enforce what has been agreed and rule on whether exceptions should be made. It is a route the Lions should follow: what is the use of hollering about the value of the Lions and the incalculable loss the team’s demise would mean while refusing to talk with the employers of those at the sharp end? - Guardian