Leinster and Ireland sweating on Sexton scan after positive weekends 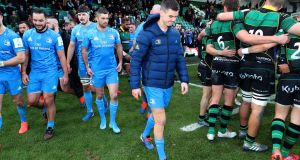 Leinster’s Jonathan Sexton after the match against Northampton Saints. Leinster are expected to reveal the extent of his injury at their weekly media briefing today. Photograph: Billy Stickland/Inpho

It’s time to fret about Johnny Sexton again. On another generally positive weekend for Irish rugby, the Leinster captain extended and twisted his knee nastily in a slightly late tackle by the Northampton centre Matt Proctor.

Sexton immediately went for a scan, and Leinster are expected to reveal the extent of his injury at their weekly media briefing today. A leading candidate to succeed Rory Best as national captain, the results of the scan could have implications for both Leinster and Ireland, whose opening Six Nations game at home to Scotland on February 1st is eight weeks away.

In the interim, Leinster host Northampton in their marquee Christmas game next Saturday at the Aviva Stadium and have three Pro14 derbies before their final two Heineken Champions Cup games at home to Lyon and away to Benetton.

Aside from Ross Byrne, Leinster’s only other outhalves are his brother Harry (one of five Byrnes registered in their European squad) and Ciarán Frawley, neither of whom have played in the competition.

But polishing new gems is the Leinster way.

“The two of them are really progressing well,” said Leo Cullen in the aftermath of Leinster’s handsome 43-16 win against Northampton at Franklin’s Gardens on Saturday. “They’re only 20 and 22 so they are just trying to add little bits of experience. Frawls was unlucky to get injured over here in pre-season and be out for a decent chunk. But those guys are training well.”

Due to the World Cup the early season domestic running orders in France and England may or may not be slightly skewed, but in backing up their win away to the Top 14 leaders by doing likewise to the Premiership leaders, and by seven tries to one, Leinster have a home quarter-final already clearly in their sights.

They could even secure qualification with two rounds to spare were they to win with a bonus point next Saturday. However, Cullen will be quick to tell anybody within earshot this week that Leinster beat Northampton 40-7 away six seasons ago only to lose a week later at the Aviva 18-9.

The Saints’ coach Chris Boyd has said that he may rest impressive number eight Teimana Harrison, and confirmed that Courtney Lawes and the Franks’ brothers, Owen and Ben, will still be sidelined, but Northampton still have a realistic chance of qualifying.

Alas, Connacht could not complete the Irish four-timer of the opening weekend when they were beaten 26-17 by Gloucester at Kingsholm yesterday.

Connacht might have procured a bonus point had the TMO Eric Gauzins not wrongly ruled out a try by Dominic Robertson-McCoy, but Andy Friend’s team are now bottom of Pool 5, albeit they could rise to second by winning the rematch at the Sportsground next Saturday. Toulouse are top after beating Montpellier 23-9.

A late intervention by the TMO at the end of Munster’s 10-3 win over Saracens, bizarrely after Romain Poite had blown the full-time whistle, led to Arno Botha being red-carded for leading with his forearm into the neck of Nick Tompkins. Johann van Graan had no quibbles with the red card, and declined to comment on whether Botha might escape a suspension.

Mark McCall has strongly intimated that many of his absent World Cup finalists, such as Owen Farrell and the Vunipolas, will be back for next Saturday’s return meeting in Allianz Park. Their bonus point keeps the champions interested and leaves Munster most probably in need of an away win against either Saracens or Racing in their next two games.

“Yes, it certainly looks that way,” admitted van Graan. “I think if you want to get a home quarter-final and win your group, as it stands, you probably need to win at least two away.

So, we have done one away, and obviously it would be brilliant if we can win both away, but it certainly looks like one of the two away.”

“Racing still have to go to Saracens in round six which will be another massive game so no let-up in this group. But we knew as soon as the fixtures came out that, home and away, it was going to be tough in this group and I think there are three teams fighting for one, possibly two, spots.”

“I think that’s the beauty of European rugby, it changes week by week and hopefully this competition will remain intact in terms of how special it is in round six, that everybody has got a chance.”

For the third game running, Ulster were indebted to John Cooney for a narrow victory when his 79th-minute penalty secured a 25-24 win at home to Harlequins at the Kingspan Stadium on Saturday.

It leaves them atop Pool 3, but Clermont are sitting a point behind them after their bonus-point win away to Bath. Furthermore, Paul Gustard, the Harlequins’ director of rugby, has said “we’re still going to throw everything” at Friday night’s crunch rematch with Ulster.