Ian Foster extends All Blacks’ boot-room dynasty but who is he?

What are the major challenges the latest New Zealand rugby head coach is set to face . . . 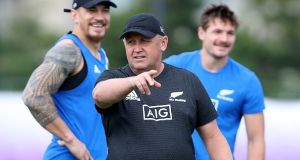 The new head coach of the All Blacks, Ian Foster, during a New Zealand training session in Japan. Photograph: Hannah Peters/Getty Images

Ian Foster will be the first All Blacks boss without previous international head coaching experience since 2003 when he takes over next year but few know New Zealand rugby better than the former Waikato outhalf.

Predecessors Graham Henry and Steve Hansen had both coached Wales before taking up the post as part of a coaching dynasty underpinned by assistant Wayne Smith that brought unprecedented success to an already highly successful team.

Foster’s promotion from assistant under Hansen on a two-year deal is an attempt to extend that dynasty but he knows as well as anyone he will be out the door long before the 2023 World Cup if he cannot keep the All Blacks winning.

The 54-year-old carved out a lengthy playing career with his home province of Waikato, for whom he made a record 148 appearances before taking part in the first three seasons of Super Rugby for the Waikato Chiefs.

The Waikato side of the early 1990s was a powerhouse in New Zealand rugby, winning the national championship in 1992, snapping Auckland’s record Ranfurly Shield run in 1993, and producing several All Blacks.

Foster, however, never made the step up to the national side alongside his Waikato team mates Warren Gatland, who has coached Ireland and Wales, and John Mitchell, the current assistant to England’s Eddie Jones.

He began his coaching career with Waikato in 2002 before replacing Kevin Greene at the Chiefs in 2004, taking them to their first playoff in his debut season where they lost in the semi-finals to the ACT Brumbies.

The Chiefs would not make the semi-finals again for five years, however, raising doubts about Foster’s coaching.

While they made the 2009 final, where they were thrashed by a superb Bulls side, the Chiefs spiralled downward for his last two seasons in charge, finishing 11th and 10th before he stepped down in 2011.

The following year Foster took control of the All Blacks’ backs under Hansen.

That Barrett-inspired backline took the All Blacks to new heights in 2016 but by the time the British and Irish Lions arrived for their tour in 2017, opposing teams had worked out how to shut down their time and space.

Their inability to break down increasingly efficient defences, coupled with constant shuffling of the midfield selections, was criticised by pundits and is something Foster will need to address before his side meet Wales at Eden Park next July.

Handed a two-year contract, Foster will have to be on the lookout for fresh, young talent straight away. Kieran Read, Ben Smith, Ryan Crotty and Sonny Bill Williams have all signalled an end to their test careers by moving abroad along with the likes of Matt Todd, Liam Squire and Waisake Naholo, who gave the All Blacks impressive depth under Hansen.

In addition, senior players Sam Whitelock, Beauden Barrett and Brodie Retallick have sabbaticals built into their contracts with the latter unavailable for the next two years while he plays club rugby in Japan.

There is also concern the ‘Baby Blacks’ production line that provided a stream of All Blacks until 2015 might be drying up. After winning four straight world under-20 titles from 2008-2011 they have won only two since, with just five players in the last four years graduating to the senior side.

His association with the failed 2019 World Cup campaign as backs coach under Hansen also leaves Foster vulnerable to another problem his former boss did not have in 2012 - a popular rival waiting in the wings. Former All Black Scott Robertson, who has won three straight Super Rugby titles with the Canterbury Crusaders, was the other coach who reached the last stage of the selection process.

“It’s been a tough old month, it’s been a big process and I know that Scott stood and wanted this job and had a massive degree of support,” Foster added on Wednesday. “I’ve seen him coach, he’s a great man who does a great job. I feel for him right now and I know there’ll be different views on this but all I can say is that I’m incredibly grateful to have this opportunity .

“I will do everything I can to represent this black jersey to the best of my ability.

“We need to change some things up, we’re coming off a semi-final loss that hurt so there’s a group with a lot of pain in it at the moment.

“So how we adjust and refresh this group and change things up is going to be vital. Just to create the energy we need to get back where we want to be.”