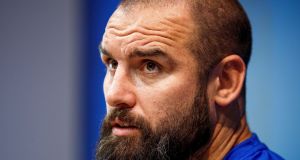 Leinster’s Scott Fardy: ‘We have to go up against each other and challenge each other on a week-in, week-out basis.’ Photograph: Bryan Keane/Inpho

There is a suspicion that Scott Fardy doesn’t engage unduly with melodrama in sport, possibly attributable to a laid-back nature away from the confines of rugby, or perhaps shaped a little by his experiences in the 2011 Tohoku earthquake and ensuing tsunami that killed 1,250 residents of Kamaishi, Japan. He was playing rugby for the local Seawaves club at the time.

The 34-year-old Australian was offered the opportunity to evacuate in the aftermath but instead chose to remain, along with many of the other overseas players, to help with the relief work. Over 30 per cent of the housing, 60 per cent of the businesses and 98 per cent of the fishing fleet was destroyed.

Fardy explained in a recent interview: “It shows you the value of life. Everything was gone in one moment, you think you’re worried about things and have your concerns and then they’re taken away pretty quickly. It probably changed my perspective on quite a few things.”

Losing a rugby match is inconsequential in comparison, no matter how much a defeat smarts. Last April Connacht thumped Leinster 47-10 at the Sportsground in John Muldoon’s last match in his hometown. The result made no material difference to either side’s league aspirations at that time. Leinster went on to win the Champions Cup a fortnight later and then added the Pro14 title for good measure.

“It’s obviously a big game. It was a disappointing result for us at the end of last year, it didn’t change the fact of where we were in the league at that time, but it was disappointing to go over there and not show up.”

He watched the game on television.

Despite the nature of the defeat there wasn’t too much handwringing in the aftermath. He recalls: “I think we parked it pretty quick and moved on, and that’s rugby, sometimes it happens.”

The strength of the squad is how well we prepare together. I’m enjoying that process

Leinster will field a much stronger side on Saturday but Fardy doesn’t feel the need to babysit whatever younger players are included, arguing that the group learns from one another.

“Every guy is different. I am learning off guys here. We have an incredibly high training standard in Leinster. The way the guys prepare here is phenomenal.

“I prepare my own way, but to see other guys prepare, I take things out of what others guys are doing because they prepare so well. The strength of the squad is how well we prepare together. I’m enjoying that process.

“We have to go up against each other and challenge each other on a week-in, week-out basis. Guys want to be playing in the big games; we all want to play every week if we can. There is a lot of depth in the squad and you have to play well to get into the starting side, let alone the bench.”

“I’m looking forward to hopefully having Seánie out there at the weekend, a top quality player and probably one of the players of that Lions series (against New Zealand) two years ago now. You always want to play with guys like him, tough and aggressive. I think he is ready to go at the moment,” Fardy says.

A consistently outstanding presence for Leinster since signing in 2017, and shortlisted for last season’s European Player of the Year, would he still countenance an offer to resume his international career (39 caps) that ended two years ago if Michael Cheika came calling ahead of the 2019 Rugby World Cup in Japan?

Fardy says: “I honestly haven’t looked at it. I have been concentrating on the things I have to do [here in Leinster]. You don’t say ’bye to those things but at the moment I am just concentrating on playing well for Leinster. At the end of the day the guys that are playing there [for Australia]are playing good footie.

“I thought [Lukhan] Tui has played really well at six for the Wallabies. He’s been great. Whether I get selected for that squad, that’s another story; backrows are doing a good job and one player is not going [to make a difference].

“I don’t think you are ever 100 per cent [ruling yourself out of Test rugby] until you stop playing the game competitively [but] I am definitely just concentrating on what I need to do to make it in Leinster. There are so many good players here that if I want to do anything else in the game I need to be part of the 15 this week, next week and week after that.”