Henderson and Cooney set to return for trip to Thomond 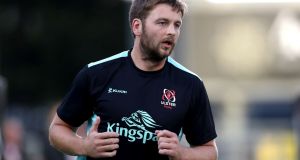 Ulster will have front-liners Iain Henderson and John Cooney back in their squad for Saturday’s first interprovincial clash of the season when Dan McFarland’s unbeaten side travel to Thomond Park to meet Munster.

However, the northern province have picked up a number of fresh injuries from their two-game trip to South Africa, while it also appears that although Jacob Stockdale and Rory Best are edging closer to their much-anticipated first games of the season, this may not be until the following week against Connacht.

Stockdale, who shipped a hamstring injury during pre-season, was described by Dwayne Peel as being “very close” to playing again.

In terms of Ireland and Ulster and Best’s hamstring, the likelihood seems to be that the 36-year-old will see action within the next two weeks, with the Connacht clash the most probable point of return.

Henderson was rested for the two-game tour to South Africa which saw Ulster snatch a dramatic 39-39 draw at the Cheetahs last Friday, after winning at the Kings five days earlier.

Cooney started the meeting with the Kings, but sustained a scalp laceration which required stitches, and he was stood down from involvement in the clash with the Cheetahs at altitude in Bloemfontein.

Marcell Coetzee is on the injured list from the trip to South Africa, and will not feature in Limerick on Saturday after the Springbok, whose time at Ulster has been marred by knee injuries, shipped a shoulder knock against the Cheetahs.

Coetzee’s latest issue, though, is believed to be short-term and not another season-ender.

Prop Wiehahn Herbst (groin) and flanker Sean Reidy (hamstring) will also not be with the squad for Limerick after succumbing at the Cheetahs, while Henry Speight, who injured his knee when scoring the late try which helped set up Billy Burns to convert and dramatically draw last Friday’s game in Bloemfontein, is also out.

Hooker Rob Herring has been also added to those unavailable for this weekend after returning to Belfast with a toe issue.

New signing Jordi Murphy will continue to recuperate from the ankle injury which kept him out of the South African tour, while Marty Moore is still to make his Ulster Pro14 debut as he has been side-lined by a calf problem.

On a more positive note, new signing Will Addison, who missed out on both games in South Africa due to illness and injury, and Craig Gilroy, who shipped a rib issue, should both be available for the Thomond Park clash, a venue where the province last won in 2014.

Reflecting on the two-game visit to South Africa, Peel reiterated the general view that Ulster were reasonably contented with taking seven points from two games.

“We saw with Glasgow losing to the Kings, and to be fair to the Cheetahs I think they only lost twice at home last season, so it’s not an easy place to go. Seven points, we’ll take it and move on.

“We’re happy with the unbeaten start, but there is loads of improvement [needed] to be at the level that we want to be at,” said Peel.

Remaining unbeaten in South Africa means that the province have now put together a run of nine games without defeat – four in this campaign and five at the back end of last season – with their last reverse being at Cardiff Blues last March.

Indeed, this run includes their previous visit to Thomond Park when they drew 24-24 on the last day of the Pro14’s regulation season, when the Northern province’s hopes of a top three finish were extinguished and they were then forced to meet the Ospreys in a Champions Cup play-off, a game they won.