The Irish provinces' standout performers in the Pro14 so far 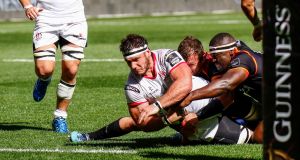 Two serious knee injuries since he agreed to sign for Ulster in February 2016 limited Marcell Coetzee to just five appearances for the Irish province prior to the start of this season. In three Guinness Pro14 matches to date in the new campaign, the 27-year-old South African has reminded everyone of the pedigree he possesses as a player, one whom the Springboks have capped on 28 occasions.

A rumbustious ball-carrying flanker with an offloading game to match and a voracious work ethic, he has been an integral part of Ulster’s rise to sit atop Conference B of the Pro14. At the start of the season Ireland forwards coach Simon Easterby was dispatched to Belfast to help out as a result of the uncertainty governing the arrival date of new head coach, Dan McFarland, now thankfully resolved.

A couple of high-profile departures and a middling injury list suggested that Ulster might have had to endure a difficult opening to the season, but narrow victories over the Scarlets (15-13) and Edinburgh (30-29) at the Kingspan stadium were followed by a victory on the road against the Southern Kings. Performance imperfections and the absence of try bonus points are of lesser concern for the moment; John Cooney’s placed-ball heroics in the first two games have seen to that.

Coetzee will feel like a new signing, and his impact is easily discerned not only from game footage but in relation to several categories in terms of statistics. As the graph outlines, he has carried more ball (52) than any other player in the competition; is second in offloads (seven), and also features prominently in terms of defenders beaten (eight) and turnovers won (three).

If the Springbok can be viewed, given his injury misfortune, as a newish presence in the team, then two players who signed for Ulster this season – the Irish-qualified Will Addison and Wallaby international Henry Speight, the latter on a short term contract until the New Year – have made impressive starts to their careers in a white jersey. A former Sale Sharks player, Addison’s (43 carries) first inclination is to run while Speight has beaten 12 defenders and is in the upper echelon in terms of offloading (four) in the matches to date.

Ulster coach McFarland has made good use of power runners like Coetzee and Stuart McCloskey to get over the gain-line and give the team a front foot platform, while an ability to offload in the tackle make the dynamic duo very difficult to contain. Ireland coach Joe Schmidt will have handed McCloskey a “to-do” list in terms of the development of his game, and there is no doubt that the centre is posting some impressive figures, including four turnovers at the breakdown. His midfield partner Darren Cave has started the season in fine form.

Craig Gilroy, who scored a hat-trick against Italy in the 2017 Six Nations Championship – the last of his 10 caps for Ireland – was another for whom a return to the test arena would be predicated on an improvement in certain areas, one of which was work rate. This aspect of his performances in the Pro14 to date can’t be faulted (42 carries), the fourth-highest in the league in which the top three are filled by fellow Ulster players. His pace and ability to beat defenders (13) has never been in doubt.

Another new arrival in Belfast, the Irish-qualified Billy Burns, was handed the number 10 jersey, a troublesome position for the province to fill at times last season. In 227 minutes on the pitch over three games he’s kicked the ball from hand on just 14 occasions, or 6 per cent of the time. He’s enjoyed more pitch time at this point that any of his counterparts in the other provinces, but it still bears comparison, albeit at a fledgling stage of the season: Leinster’s Ross Byrne kicks the ball from hand least often (5.6 per cent), followed by Munster’s JJ Hanrahan (5.7 per cent), Burns (6 per cent) Jack Carty (10.1 per cent) and Joey Carbery (11.1 per cent).

Ulster don’t have a monopoly on new signings making an impact, as twice-capped Springbok backrow Arno Botha – who joined Munster from London Irish on a one-year contract during the summer – has excelled, largely in tandem with Tommy O’Donnell whose figures are also eye-catching.

The 26-year-old has been excellent on both sides of the ball, making the second-most tackles (45) – Glasgow Warriors and Scotland international Jonny Gray leads the way in that category – while also offering as a willing and effective buttress, highlighted in 37 carries and eight defenders beaten.

Connacht’s Paul Boyle (21), the former Ireland Under-20 captain, has been the standout young Irish player so far this season. The Gorey native switched to the Connacht academy last season having initially made an impression while playing for Lansdowne as a teenager in the All Ireland League.

He is far from the biggest number eight in the tournament but, as his numbers suggest, it hasn’t diluted his impact in carrying ball or at the breakdown. He’s also thrown in a couple of tries for good measure. He has grasped the opportunity extended to him and it will be interesting to note whether he can sustain that early momentum.