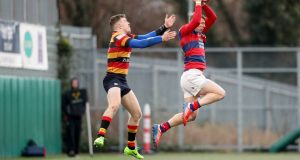 Lansdowne gave another significant warning to their Ulster Bank League title challengers with a brilliant 38-8 bonus point victory over Clontarf on the Aviva Stadium’s back pitch.

Mike Ruddock’s men kicked off the New Year by extending their lead at the top of Division 1A to 13 points. The ever-impressive Scott Deasy ran in an intercept try to put the seal on their 11th straight league win and complete his own 18-point haul.

The hosts’ other tries were shared out between Adam Leavy, who also caught the eye in the Lansdowne back-line, Daniel McEvoy, Alan Bennie and Aaron Conneely, with out-half Deasy providing the assists for the first two inside 19 minutes. Leinster-capped centre Conor O’Brien crossed for Clontarf who have slipped from second to fourth in the table.

Like Lansdowne, Cork Constitution are on their travels in next Saturday’s Bateman Cup semi-finals. They warmed up for their trip to Armagh with a convincing 26-0 dismissal of Buccaneers which now sees them lead the chasing pack behind the headquarters club. They had two tries in each half from Joe White, Sean Duffy, Luke Cahill and Ned Hodson.

Dublin University have climbed out of the bottom two thanks to a 25-10 defeat of close rivals St. Mary’s at College Park. Returning out-half Jack McDermott played a leading role, kicking 10 points for the students and scoring a try from a Mary’s error.

Sam Coghlan Murray came back to haunt his former club UCD as he scored two tries in a tremendous 31-26 comeback victory for Terenure College at Belfield. ‘Nure trailed 26-7 at the break but Coghlan Murray’s brace, a penalty try and Mark O’Neill’s closing effort, coupled with a closing penalty from James Thornton, saw the visitors prevail and move up to third.

Meanwhile, brothers Stephen and Conor Fitzgerald combined for 15 points as Division 1B pacesetters Shannon swept past Naas on a 25-3 scoreline. Winger Richard Reaney weighed in with a try and 13 points from the tee as Ballynahinch beat Ballymena 28-13 to stay four points behind the leaders.

Out-half Tim Foley was Old Belvedere’s match winner with a coolly-struck 76th-minute drop goal in their 18-15 win over Banbridge. ‘Belvo have moved back into the top four, while Munster’s Jame Hart converted Noel Kinnane’s late try to complete a stirring fight-back from UL Bohemians who came away from Donnybrook as 17-15 victors over Old Wesley.