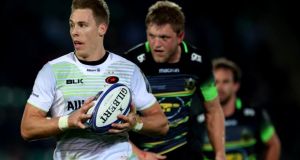 Liam Williams is set to make his return from injury in Saracens’ pivotal Champions Cup match against the Ospreys on Saturday, handing Wales a timely boost before Warren Gatland names his Six Nations squad next week.

Williams has been out of action with a groin/hernia injury sustained in Wales’s win against Georgia on November 18th but has taken a full part in training this week and provided he encounters no adverse reaction he will line up for the two-times European champions in Swansea.

“He’s available for selection,” the Saracens director of rugby, Mark McCall, said. “It was a hernia, groin issue and those things can be complicated. You don’t know really how long it’s going to be. We’ve taken our time but he looks pretty good. Today and tomorrow he needs to make sure there’s not a reaction to today.

“It’s always a calculated gamble to bring someone back who hasn’t played for a bit but I think you do have the odd exceptional player who is able to do that and is good enough for you to want to put that player in. Liam is probably in that category. He’s an exceptional player and it’s great to get him back just before he’ll go away again [with Wales].”

With George North (knee) and Hallam Amos (ankle) unlikely to be fit for Wales’s Six Nations opener against Scotland on February 3rd, the return of Williams will be welcomed by Gatland, particularly with Leigh Halfpenny a doubt for the Scarlets against Bath on Friday. Gatland is already without Dan Lydiate, who was ruled out for the rest of the season on Tuesday, as well as Williams’s fellow 2017 Lions Sam Warburton, Taulupe Faletau and Jonathan Davies.

For Saracens, the return of Williams, who has three tries in his two European appearances this season, is just as significant, considering they are third in their pool, two points behind the Ospreys and seven behind Clermont.

Last weekend they were boosted by the returns of Billy Vunipola and Maro Itoje in an imperious victory at Wasps, however, and against the Ospreys McCall will be close to having a full contingent to choose from, though Duncan Taylor misses out with another head injury.

“It’s the first time for a few years we’ve been in a fifth pool match where everything is on the line,” said McCall, whose side lost their record 20-match unbeaten run in Europe at home to Clermont last month. “It’s a new experience for us even to be in that position so early in the competition. If we win we’ve got a chance of getting to the quarter-finals.”

The former England international Matt Banahan will join Gloucester next season after 12 years at Bath. Gloucester’s director of rugby, David Humphreys, said: “His versatility and ability to play in a number of positions across the backline adds real depth to our squad.”