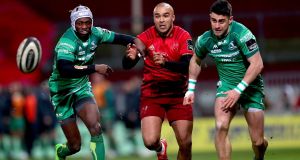 Defence was arguably the key constituent in Munster’s five-try, bonus-point win at a bitterly cold Thomond Park, a victory that arrested a four-match losing sequence in terms of the interprovincial clashes in this season’s Guinness Pro14 tournament.

While there is a temptation to focus on the post-interval points landslide (29), it was the investment in line speed and aggression in the tackle and contact area that reaped a dividend in the final 30 minutes of the match as they wore Connacht down and then out, a period in which Munster claimed four tries.

Connacht started enterprisingly using the full expanse of the pitch and getting a little bit of joy in the outside channels initially but that strength became a weakness as the game wore on because there was little variation or nuance.

The visitors became predictable in possession, lateral in orientation and failed to appreciate the virtues of a kicking game that would have served the twin purposes of slowing down the onrushing red line and also utilising the expanse of turf in behind, particularly when Connacht had the advantage of a strong wind in the first half.

No one should fault the integrity of effort and in that respect Jarrad Butler and Quinn Roux – his yellow card notwithstanding – both superb, Cillian Gallagher, captain John Muldoon, Tom McCartney, Caolin Blade and Tiernan O’Halloran finished on the positive side of the ledger: a hat tip to the Connacht scrum and props Peter McCabe and Conor Carey for winning three scrum penalties.

However fatigue, mental and physical, gradually exacted a toll that ended up being quite punitive. Connacht coach Kieran Keane admitted: “We were well and truly bullied around in a number of areas. I thought their line speed was certainly impressive.”

Keane’s view was shared by his Munster counterpart, Johann van Graan, who explained that after conceding a slew of early penalties, Munster adjusted to the edicts laid down by referee David Wilkinson. “We adapted after 20 minutes on the field.

“We tried to adapt to the referee as quickly as possible. You watch for trends and after he called in both captains we said ‘you’ve got to stay out of the breakdown’ in terms of contesting. That means you can have more numbers on your feet and increase the line-speed and I thought we put their attack under quite a bit of pressure.

“We’re very happy with an 80-minute performance and the biggest thing was not the attack, I thought [but] the defence. We defended really well, got a lot of width, good decision-making in when to go for the ball and when not.”

Rory Scannell, Jack O’Donoghue and man-of-the-match Conor Oliver excelled in and around the contact areas and breakdown but also in carrying duties.

Munster’s facility to harry, stifle and smother allowed them to turn over possession and from this source they were able to get over the gain-line quickly, initially through their forwards, and then look to change the point of attack. Ian Keatley revelled in the role of game management, his range of passing and kicking and vision, a catalyst for his side’s best moments.

He was ably supported by his halfback partner, the excellent Conor Murray, who grabbed a brace of tries from close range while also making good decisions in switching between the power of Jean Kleyn, CJ Stander, Dave Kilcoyne and centre Chris Farrell to releasing the team’s more fleet-footed brethren.

Try scorers Andrew Conway and Keith Earls took to their toes whenever presented with an opportunity, a real handful that Connacht struggled to contain. Munster led 10-6 at the interval, the exquisite timing of secondrow Darren O’Shea’s run and Murray’s pass leading to a try. The remainder of the points came from the respective boots of Keatley and Connacht outhalf Jack Carty.

Keatley tagged on a penalty on 50 minutes and a gorgeous grubber kick from the outhalf took a wicked bounce that deceived O’Halloran and allowed Conway to outmuscle the Connacht fullback to the touch down. Keatley was again the architect for his side’s third try, drawing defenders on a mazy run before timing his offload to the supporting Conway perfectly; the latter fired a great cut-out pass that allowed Earls an unencumbered run to the corner.

At 25-6 the game was effectively over but what happened next guaranteed the outcome. Connacht’s night got a great deal worse when Roux flipped Earls over in a tackle with the Munster wing coming down on the shoulder area and his legs appearing to go marginally past horizontal.

Referee David Wilkinson in consultation with the television match official Kevin Beggs decided on a yellow card but it could and probably should have been red; the duty of care rather than malice the issue. Munster scored two tries and 14 points during Roux’s sin bin sabbatical, the game’s final score a try for Connacht hooker McCartney following good work by replacement scrumhalf James Mitchell.

Europe beckons for both. Connacht will be stronger personnel wise, Munster sharper heading for Paris, both provinces hoping that will suffice to bring positive results next weekend.