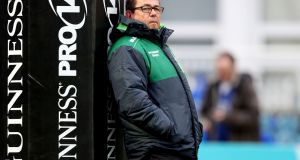 Connacht head coach Kieran Keane. The side will be freshened up for the clash against Munster. Photograph: Bryan Keane/Inpho

Connacht are preparing for an “emotional battle” when they head to Thomond Park for Saturday’s final festive interprovincial against Munster.

With both sides light on current internationals, and Munster without a win in this series, Connacht are looking to repeat their 2015 Thomond Park heroics when they won in Limerick for the first time since 1986.

However, Connacht defence coach Peter Wilkins insists Munster are now more dangerous on the back of two defeats.

“They will disappointed in their results over the Christmas period, but arguably it makes them a more dangerous beast, and they will be desperate to get something out of this game, even more so than usual.

“It doesn’t change how we are approaching it. We have a huge amount of respect for Munster and we will have to play really well to get a result. It is a ground where a lot of teams have struggled and huge credit to Munster and the environment they create down there.”

While Munster lost to Ulster after a 17-0 half-time lead, Connacht left behind a first win in the RDS when emotion ruled the head in the final minutes. And Wilkins says it is another learning Connacht have put in the bank for this week.

“We are group that learn our lessons. You get to this half way point in the season and and there is probably a key learning from each week.

“If you can put that in the bank, it will contribute towards another good performance the following week, so we are on that journey.

“It’s probably bit of a cliché, but there is always a bit of an emotional battle when you play Munster – the excitement they bring to the game, particularly when they get into your 22m zone with their heavy patterns and the forwards picking and going, and their backs coming direct. You’ve got to win that emotional battle or at the very least match it before you can start thinking about the skillset and the tactical bit of it.

While Cian Kelleher, who is following head injury assessment protocols, is the only player ruled out after last weekend’s bonus-point loss to Leinster, Wilkins says there will be changes to the travelling squad.

“We will certainly look at freshening up the squad, I think we need to. There are guys high on minutes and the internationals have to have their time respected, so we will freshen up. We felt in attack and defence we were a little flat at times against Leinster, we lacked tempo on both sides of the ball, but certainly we are not going to take anyone down the road who we don’t think will be contributing to get a result.”

With internationals Kieran Marmion, Bundee Aki and Ultan Dillane likely to be rested, centre Pita Ahki is in contention for a return to duty after his wedding in New Zealand, while Quinn Roux, youngster Cillian Gallagher, and scrumhalf James Mitchell all come into contention.

Wilkins says youngsters such as Ireland U20 captain Paul Boyle, Sean Masterson – brother of Eoghan – and Gallagher have been involved with the senior squad recently.

“They have made a terrific impression. It is an area Kieran Keane has been excellent in looking at our academy group, and it’s important to us as a team and an organisation that they get opportunities. Those guys have been around a lot over the last couple of months.They know our systems, they have proved themselves within the group and it’s only a matter of time before they get an opportunity to show what they can do. This period over the interpros and Europe is a good time to give some opportunities to them.

“This fixture is a big game for us in so many respects. We have big ambitions for this run of three games and we want to finish really well. Munster in Thomond are a dangerous beast regardless recent results. They are expanding their game, but still have terrific structures in their kicking game and ability to squeeze teams, but there are signs they want to play more. There will be multiple threats, so we will have to be on our game.”