Garry Ringrose ruled out for up to six weeks 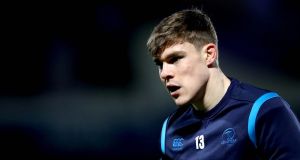 Leinster coach Stuart Lancaster believes Garry Ringrose is already showing willingness to make a return after an operation on his ankle, which will keep him sidelined for five or six weeks.

It’s likely Ringrose will miss Leinster’s European games against Glasgow and Montpellier and February’s opening Six Nations Championship matches. The unfortunate Ringrose was just regaining form after having operations on both shoulders.

However prop Tadhg Furlong has recovered well following his withdrawal from the game with Ulster with a head injury. He is in line to be available to play this week. A complicating issue is a hyper extension to his left arm, which is also being assessed.

“Five or six weeks is usually the timeline on those sorts of injuries,” said Lancaster referring to Ringrose. “I actually spoke to him this morning. Garry is very philosophical about it. It’s not something that he could have controlled.

“He’s in the meetings already and contributing. He had the operation yesterday and is here today so that’s typical Garry really. He’ll be back soon.”

Seán O’Brien is unlikely to line out against Glasgow in the first of Leinster’s two weeks of European Champions Cup action.

He is being assessed but continues to suffer from a hip injury that flared up before Christmas. He has not played since the second European match against Exeter in Aviva Stadium.

James Tracy and Adam Byrne are not available for selection. Tracy suffered an elbow dislocation and will see a specialist this week, while winger Byrne has had a flare up of his knee issue and is also due to see a specialist.

Joey Carbery’s recovery continues apace following a fracture to his wrist against Fiji in November. The outhalf will continue training this week to see how it reacts to the higher level of competition on the training ground.

“His first training session was the end of last week so this is his second real training session to date,” said Lancaster. “He certainly looked fit and well on Thursday when he trained. He’ll be available for selection for a highly contestable position there... 15 or 10.”