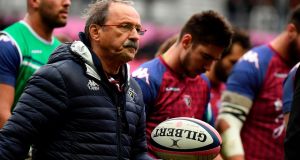 New France manager Jacques Brunel: his side are in need of a significant confidence boost, having lost five of their last six matches. Photograph: Alain Jocard/AFP/Getty Images

France must concentrate on being contenders for the Six Nations title before even thinking of the 2019 World Cup in Japan, new coach Jacques Brunel said on Monday.

Brunel took over from Guy Noves after the former Stade Toulousain boss was sacked after two years in the job last December.

Under Noves, Les Bleus won only seven of 22 games and finished the Six Nations in fifth and third place.

“France must be a contender for the title every year,” former Italy coach Brunel, who led Perpignan to the French league title in 2009, told a news conference on Monday.

“With that in mind, the opening game against Ireland is crucial.”

France start their campaign at the Stade de France against Ireland on February 3rd with a potentially pivotal match against England at home in the penultimate round on March 10.

France have never won the World Cup, but have finished as runners-up on three occasions, most recently in 2011. However, Brunel insisted that the team needed to focus on short term objectives rather than obsess over the Webb Ellis Cup.

“Let’s not think too much about the World Cup for now, there are steps to climb before that,” he said.

A decent showing in the Six Nations will require a high level of fitness from the players, Brunel added.

“High-level rugby is about intensity and speed and that’s what we need to concentrate on,” he said.

Les Bleus are in need of a significant confidence boost, having lost five of their last six matches, with no wins coming in their four international matches last November.

“We will try to work on the basics with the little time we have ahead of us and insist on the players’ forte.”