Rugby statistics: Clubs running the rule over the referees 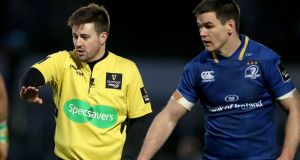 In the last pool game Munster come across a familiar face in Ben Whitehouse – he has refereed them three times in the Pro14 this season. Photograph: Dan Sheridan/Inpho

Team sport offers a correlation between discipline and winning and in the specifics of rugby, the focus generally alights on the penalty count in matches.

While there are exceptions to the statement, a rule of thumb is that a team conceding fewer penalties usually prevails. Given that referees are the ultimate arbiter of fact – with occasional prompting from assistant referees and the television match official – over the 80 minutes it comes as no surprise that clubs analyse the whistlers and their on-field peccadilloes.

Quite apart from looking at the aspects of the game to which a referee pays particular attention or ‘he’s hot on’ to use the vernacular, the analysis filters down to how he likes to be addressed, what he’ll tolerate in terms of interaction and in a former life his cadence for a scrum sequence.

This weekend, Ulster, Leinster and Munster resume their quest for the playoffs in the Champions Cup and all three provinces will have done extensive homework on the referees for their final two pool matches.

The graphic illustrates the average penalty count over two or three matches in some instances in which the referees in question have officiated, the number of yellow cards awarded and a table that charts penalties that the provinces have conceded in the four rounds of the European competition to date.

Ulster are first into action when they host La Rochelle at the Kingspan Stadium on Saturday (1.0) in a game they must win. England’s Wayne Barnes will officiate and as the graphic illustrates he has the second highest penalty count in the two matches over which he has presided but it doesn’t tell the full story.

He was in charge when Leinster beat Montpellier at the RDS on the opening weekend of the tournament and awarded 17 penalties and a yellow card that day but it was in round four – he didn’t referee in rounds two and three – that his average is skewed appreciably because in Racing 92’s win over Castres Olympique he awarded 28 penalties, two yellow cards and a red card to Argentine wing Juan Imhoff for a headbutt.

France’s Jerome Garces will officiate in Ulster’s final pool match and his average over two matches is 17 penalties, the fewest of all six referees, broken down as 14 in Leinster’s win against the Glasgow Warriors in Scotstoun and 20 in Munster’s triumph over the Leicester Tigers at Thomond Park. He has yet to brandish a card of any description.

Ulster’s discipline has been pretty impressive as not once have their conceded double digits in terms of a penalty count in a match, at an average of 7.5 over the four games.

Leinster welcome Glasgow Warriors to the RDS on Sunday lunchtime (1.0) and Romanian-born Italian official Marius Mitrea is the man in the middle. It’ll be the first time that he’s refereed Leo Cullen’s side this season, which is slightly unusual in the sense that he is a Pro14 referee, and on the basis of the number of occasions he took charge of their games last season, including the semi-final defeat to the Scarlets.

Mitrea’s penalty average (17.66) is over three matches, the second lowest figure and just two yellow cards in 240 minutes of rugby. Leinster then travel to France to take on Montpellier in the final round of pool fixtures where 30-year-old Welsh born, English affiliated referee Luke Pearce is listed to officiate and his figures are a 21 penalty average over two games and a brace of yellow cards.

Leinster also boast an excellent average of conceding 7.5 penalties per game; they strayed into double figures only in the home match against the Exeter Chiefs.

Of the Irish provinces, Munster are the only ones to have the same referee for a second time in the pool stages as England’s Matthew Carley will preside over their game against Racing 92 in Paris, having officiated in their draw away to Castres Olympique. In three games in charge he has awarded 68 penalties (22+20+26) at an average of 22.6 and four yellow cards.

In the last pool game Munster come across a familiar face in Ben Whitehouse – he has refereed them three times in the Pro14 this season – with the Welsh official fond of a yellow card (four) while averaging 19.5 penalties in two matches.

Munster players and coach Johann van Graan spoke during the week about reducing the number of penalties conceded in matches (average 10.5 in four games) and will be hoping that the tally is closer to the seven against the Tigers last time out than the double digits of previous matches in Europe.