Munster captain has the height of respect for fomer team-mate, now Racing 92 secondrow 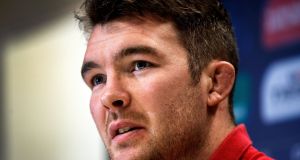 Peter O’Mahony: “Everyone wants to be involved in Europe, to play against teams like Racing away in a new stadium. It’s a big occasion.” Photograph: Bryan Keane/Inpho

It seems Munster are destined to bump into old friends whenever they encounter Racing 92. Last season it was Ronan O’Gara as their assistant coach, this Sunday it will be Donnacha Ryan and, of course, should they meet again next season, it will be Ryan and Simon Zebo.

O’Gara’s insider knowledge didn’t prevent Munster completing a double over the French club last season, backing up a handsome away in their rearranged match a year ago by winning again at Thomond Park a fortnight later, albeit O’Gara had an understrength Racing surprisingly well-primed.

However, the presence of Ryan in the Racing secondrow adds a whole new threat.

He played 164 games for Munster over a 13-year period and, in tandem with Peter O’Mahony for seven seasons, went a long way to making Munster’s lineout, both offensive and defensive, one of the best around.

Now though, O’Mahony must compete in the air, as well as on the ground, against his long-time compadre, of whom the Munster captain says: “He’s the kind of guy you want in your team on big occasions. It’s probably enough said. He’s physical, he’s hard, he’s a very bright and diligent rugby player who does a lot of homework. So, he’s everything you want in a secondrow.”

Racing’s threat to Munster’s lineout, chiefly through the player dubbed Octopussy in the French media, Leone Nakarawa, was evident in the first meeting at Thomond Park last October.

“With ‘Dunners’ there now, it’s a little bit more difficult,” admits O’Mahony. “But we can’t throw in a new lineout menu. We’ve got to go back to what we know, back to our basics, and trying to be accurate; top a jump, top a lift. You’re going to be up alongside some impressive guys in the air who can read well and have the ability to defend lineouts very well. At this level, it’s a contest of the highest order, and that’s what it’s going to be at the weekend.”

That said, even knowing an opposition’s call is no guarantee of success according to O’Mahony.

“Dunners knows what we do but we haven’t changed anything. It’s still split second stuff, so even if I was given a [opposition] lineout call it would be very hard to react as quick as someone who knows what they’re doing. You just have to be good at it.”

Ryan has been on the winning side in all his four starts following an injury-delayed campaign with his new club, and on viewing Racing’s 58-6 thrashing of Clermont last Sunday, O’Mahony observed: “He was into everything, he was busy and making a nuisance of himself, and his lineout defence was excellent.

“We depended on him a lot here for carrying, but they probably have sufficient numbers to do that, so he can put the head down and work hard. He’d enjoy that. You’d expect a player of that quality to have an influence on whatever team he’s playing for.”

The scale of Racing’s win against a depowered Clermont also showed that “they certainly have the potential to put teams to the sword” according to O’Mahony, and a 14-point salvo in the opening 12 minutes has been typical of some of their fast starts to date.

“We found out the hard way a few weeks ago that if you leave quality teams pull out ahead of you it’s tough to pull it back,” added the Munster captain in reference to their defeat against Leinster.

By contrast, the meeting with Racing at Thomond Park in October was scoreless for the first hour and O’Mahony admitted: “I think we’d be happy enough if it was a close game and we can put ourselves within a shout.”

While Munster needed a restorative win at home to Connacht last Saturday after the festive defeats at home to Leinster and away to Ulster, O’Mahony is quick to acknowledge: “Racing are a different animal.”

But then so too are Munster when it comes to this competition. No team has navigated their way through the choppy waters of the pool stages more than them, qualifying for the knock-out stage 16 times, and there has been the usual switch into Euro mode.

“It’s kind of hard to put your finger on it, you just know straight away coming in the first day of the European Cup week that there’s something different,” says O’Mahony. “Guys are hopping off the ground to get stuck in and everyone wants to be involved in Europe, to play against teams like Racing away in a new stadium. It’s a big occasion. So, every first day of a European Cup week you know straight away.