Jenny Murphy needed a break from rugby, so she took up boxing 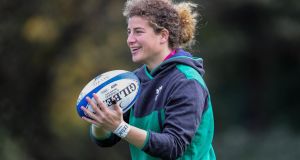 Before unveiling Jenny Murphy’s new sporting life as a boxer, see Australian rugby’s landmark shift toward sporting equality. The ARU, along with incoming female chief executive Raelene Castle, have agreed a collective bargaining agreement guaranteeing equal pay for men and women, in Sevens and Super Rugby, with an entry-level salary of 44,500 Australian dollars (€29,000).

“It’s about time,” says Murphy. “They are Olympic champions. It’s brilliant that it happened but it should have happened earlier in my opinion. I’m jealous but also delighted for them. They deserve it. More teams on the World Series and international XVs should be going down that line – you are only going to get better rugby from properly supporting players so they can train full time.”

In the meantime, Murphy is parking rugby to become a boxer. Temporarily. Last year’s disastrous World Cup on home soil – that trudged from UCD to Belfast and into oblivion – took a took a heavy toll on bodies and minds.

At 28 she remains at the peak of her considerable powers but this is not a professional sporting existence. Seeds of an actual career need nurturing.

“A grown-up job,” she explains at the launch of PepTalk’s inter-company wellbeing challenge – her new employers being the technology-driven wellbeing company.

The upcoming Six Nations cannot be embraced, not this season. New Ireland coach Adam Griggs attempted the softly, softly approach by convincing her to play in the interpro series for Leinster but a second concussion in November, following the bang sustained against Australia last August, made up her mind.

Rugby survives with Old Belvedere – perhaps alongside actual retirees Nora Stapleton, Ailis Egan and Sophie Spence – as Ireland must make do without their midfield enforcer.

“I took a [head] knock in a club match in November and so I was out for two months,” says Murphy  “Because I had a concussion in the World Cup as well, the doctors said I was fine, but I had a little bit of after symptoms . . . All the scans were done and I am fine now, raring to go. But it was time for a break.”

She means from international rugby.

“I just found the motivation to get back on the horse wasn’t where it should be. I really love playing for Ireland . . . but you have to really want to be there 100 per cent. Otherwise it’s not fair, I would feel like I would be taking up a space for someone else who would kill for that spot.”

The internal IRFU review of the World Cup meltdown, conducted by Brian McNeice, a referee and former director at Deloitte and Arthur Andersen, will not be released to the public.

“It helped that one of the girl’s had a hen party right after the tournament so a big troop of us went to Las Vegas.”

“Ruth O’Reilly. So that was an absolute ball.”

The cruel irony has Murphy stepping away just as Ireland appear to have settled on a progressive coaching ticket with Griggs, still answering to Anthony Eddy, assisted by Mike Ross and Jeff Carter.

Murphy, like everyone else, will watch the first game, against France in Toulouse on February 3rd, on RTÉ.

“I’ve been playing for Ireland since 2012. I just need to recharge the batteries and I guess fall back in love with the game so I’m playing now with Belvo.

“I also want to explore other sports. It’s not a permanent step away, more a sabbatical. Hopefully it’s the right thing for me and I’ll come back into the rugby fold, if they’ll have me, and be better for the team in the long run.”

Hang on. Other sports? A prodigal return to Liliywhite colours or have the FAI been on?

“I was looking at boxing. I don’t know. But even for pure fitness at the back of head I am thinking: will this help my rugby?

She sparred with the brother before. He lived to tell the tale.