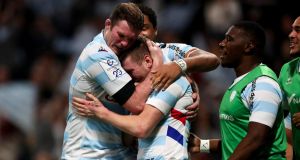 The defence of the Champions Cup may not be Saracens’ priority because they have 35 docked Premiership points to make up, but this was a chastening bonus-point defeat against a Racing side inspired by Finn Russell that the holders would have struggled to contain even at full strength.

Racing led 18-3 at half-time and despite Teddy Thomas being awarded a try on review despite appearing to brush the touchline before touching down the score line reflected their superiority. Saracens were without their England World Cup finalists and nine injured players, but they were systematically taken apart by a side that had done its homework.

Prompted by Russell at outside-half, Racing constantly widened the point of attack to neutralise Saracens’ rush defence and in the centre Virimi Vakatawa had a player who took some stopping even before he had got into a gallop and was able to off-load in a variety of ways when eventually held up.

It was not the debut Jack Singleton had dreamed of. The England hooker, who rejoined the club in the summer from Worcester, was making his first start for the champions who against fired-up opponents needed to control the pace of the game by dominating possession. Saracens had four lineouts in the opening half and lost the lot.

Racing included five jumpers in their pack and the flanker Baptiste Chouzenoux, one of only two uncapped players in the Racing side, was particularly effective on the opposition throw. In addition, he thwarted Saracens’ one meaningful attack in the opening half by forcing a penalty after tackling Singleton following breaks by Rhys Carre and Matt Gallagher.

All Saracens had from the opening period was a Ben Spencer penalty. Racing were then 13-0 ahead, two Maxime Machenaud penalties sandwiched by a Vakatawa try after centre’s angled run into the line wrong-footed the defence. Thomas’s try after 25 minutes followed Russell’s break and Juan Imhoff was denied after Vakatawa’s pass was ruled to have gone forward.

Saracens needed the interval to refocus. They brought on the South Africa prop Vincent Koch and started the second period strongly, only for their lineout failings to cost them position. They came back into the game against the run of play when Machenaud’s low pass was knocked on by Russell who was dispossessed by Nick Tompkins after picking up the ball.

The centre set off for halfway and, after realising he was going to be overhauled before reaching the line, passed to Alex Lozowski outside him.

It was no more than a respite. Russell started a move with a sidestep and pass out of the back of his hand and finished it by dummying Nick Isiekwe to score from 15 metres.

The coherence Racing showed in attack and defence contrasted with Saracens’ tendency to take the wrong decision under pressure, a reflection of the players they were missing. They know more than anyone that Europe is a considerable step-up from the Premiership and what worked in Kingsholm the previous week was nowhere near enough against a Racing side at its most irrepressible.

Racing secured the bonus point 16 minutes from time when Wenceslas Lauret finished off a driving maul. They should have scored more tries, undone by a mixture of over-elaboration and a defensive light that never dimmed, but Saracens’ second away group defeat in 13 matches with a trip to Munster to come next month showed how a team used to life at the top is this season focused on survival. - Guardian