Gavin Cummiskey hands out some big numbers after a stunning performance 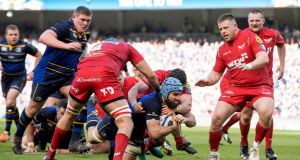 Leinster’s Scott Fardy dives for the line to score a try during the Champions Cup semi-final against Scarlets at the Aviva Stadium. Photograph: Morgan Treacy/Inpho

Rob Kearney
Transferred Irish form back into the blue jersey with hard running – 11 carries for 91 metres – and pressure under high balls. Dodgy attempt to repeat Bordeaux 2012 drop goal was worth a look. Rating: 7

Fergus McFadden
Barrel of a man, his injury reopens the door for Jordan Larmour, whose time is fast approaching, or James Lowe. What he lacks in pace is made up for in vicious, inspiring contact. Quick hands denied Stef Evans an 80-metre runaway score. Rating: 7

Garry Ringrose
Stepped into first-receiver like a natural outhalf when Sexton took a heavy blow five minutes before half-time, flinging a fine pass to put McFadden over in the corner. Defensively excellent. Rating: 8

Isa Nacewa
Quiet enough (only 10 carries for 48 metres) following quarantine – by orders of Leinster doctors – earlier in the week. But finished as captain and was still soldiering along with the late catch and offload almost gifting Kearney a try. Rating: 7

Johnny Sexton
It will take some amount of horse trading to deny him the World Rugby Player of 2018 accolade. Kicked the lights out with the conversion of McFadden’s try on half-time – all the more heroic considering the damage Dan Jones inflicted on his body. Rating: 8

Jamison Gibson-Park
The gap in all-round quality to Luke McGrath remains obvious but did his job, while ably assisted by the sort of forward dominance a scrumhalf can only dream about. Rating: 7

Cian Healy
Powered over for the second try but struggled in a number of scrums against Samson Lee. Battled on, despite being clearly hurt, until Jack McGrath took over. Rating: 7

Seán Cronin
Fine performance in an excellent campaign dating back to November when Joe Schmidt dropped him from the Ireland panel. The professional response coupled with power surges is putting genuine pressure on national captain Rory Best. Rating: 8

Tadhg Furlong
Got the blood up for some rumbles with the rest of his contributions being normalised when, of course, his controlled dominance at scrums and ruck dismantling is enormously important. Proved again to be a world leader in his position. Rating: 7

Devin Toner
Toner evolving into a physically imposing lock, and not just the guaranteed lineout operator that compelled Leinster to invest years of patient development, is in full bloom now. Ten tackles here, and still Jack Conan’s return puts his starting place under pressure for May 12th. Rating: 7

James Ryan
Twenty professional outings, this crazy unbeaten steak rolls onto Bilbao, with the most carries (16) and tackles (12) of the team.

Another great performance included trampling over Tadhg Beirne – who played with the “prodigy” in Lansdowne days – for the first try. Rating: 9

Scott Fardy
“I’m not here to score tries.” He should have banked two, not just Leinster’s killer fourth. Phenomenal all over the field, while running the lineout, to top his World Cup final performance or anything Leinster people have seen this season. A signing to rank alongside Brad Thorn and Rocky Elsom. Rating: 9

Dan Leavy
Superb, yet again, with the major fear of Leinster collapse – losing the breakdown wars – being policed after Tadhg Beirne’s early turnover. 13 carries, 11 tackles is the usual return from a special flanker. Rating: 8

Jordi Murphy
Huge performance considering the high stakes for this Ulster-bound backrow with Conan returning to the bench. Almost impossible to leave him out of the starting XV now. Almost. Rating: 7

Bench
Keeping Conan, McGrath and Larmour off the team for Bilbao will demand some serious displays – starting in Galway next Saturday – from Murphy, Toner, Healy and McFadden. Rating: 7

Coach
Leo Cullen and the backroom staff deserve plenty of credit for getting selection right, considering the long list of injuries bringing the players used up to 54 this season. Rating: 8