Munster feeling the heat in Bordeaux

‘It’s really hot out there . . . that will definitely be a challenge’ 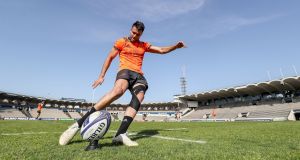 Munster encountered hotter conditions than they expected for their Captain’s Run at the Stade Chaban Delmas in Bordeaux on Saturday. Head coach Johann van Graan admitted that this will be a bigger factor than they anticipated when seeking to emulate Leinster in reaching the European Champions Cup final by beating Racing 92 in the second semi-final (kick-off 4.15pm local time, 3.15pm Irish) on Sunday.

In weather reminiscent of their first semi-final trek to this same venue in 2000, when they overcame a crack Toulouse side by 31-25, the temperatures reached 28 degrees, and this was compounded by the humidity and rock hard pitch. If Munster are to inject the kind of high tempo with which they have hurt Racing over four pool encounters in the past two seasons (three of which they’ve won) they are going to burn.

“I think it will be a factor,” admitted van Graan. “It’s really hot out there, even hotter than we anticipated so that will definitely be a challenge in tomorrow’s game. A lot of humidity, the ball will be sweaty and wet as well.

“It’s a semi-final, so you have to be very strong in each department. Obviously with the wet ball, you need to be clever in the way you handle it. In lineouts, your hooker has got to dry the ball.”

Water breaks have been factored into Top 14 games in early and late season before, and it is to be hoped JP Doyle will be sympathetic to the players’ needs but Van graan wasn’t sure if there would be breaks. “The referees have control of every decision and if he feels there should be a water break then we will gladly have some water.”

Inevitably, van Graan was asked about his and his think tank’s decision to omit Simon Zebo from the starting team by selecting him on the bench, with a back three of the returning Keith Earls, Andrew Conway and Alex Wootton preferred.

“We’ve got a lot of world class players in our back three. Keith Earls is back, Alex Wooton and Simon Zebo. Darren Sweetman didn’t make the 23. Calvin Nash is playing some good rugby. The plan that we have about finishing this game, they have quality on their bench, you have to have subs coming on and that’s the way you win.”

Clearly though, it is also a form selection, Zebo having been restricted to 40 minutes or less in his three appearances since February 23rd in large part due to hamstring and hip injuries.

Wootton’s form, meanwhile, has impressed van Graan, who cited the wingers’ “linebreaks and his ball-carrying ability, and his defence, that Glasgow game when he ran back and made that cover tackle. He’s been a consistent performer, his off-the-ball work has been pretty exceptional since I came here.”

Giving a further insight into Munster’s selection thinking, and the greater importance they’ve given to impact off the bench, van Graan said: “I think ever since the January break, we’ve put a lot of emphasis on selecting a very strong bench. We’ve alternated certain players into those positions, you only have to look at the last four weeks against Toulon, Cheetahs and Kings what our bench did.

“We don’t like to call it a bench, we like to call it impact players and they’ve been incredible in the scrum in terms of ball-carrying ability, because at the end of the game when you need special moments like Andrew against Toulon you need ball-carriers and players who can make good decisions especially in your key positions, hooker, lock, loose forward, your nine, 10 and outside back. It’s pretty crucial, it’s two quality sides going out there tomorrow so our impact will be huge for us.”

For all the talk of Racing’s strength in depth, with stellar names like Dan Carter and Joe Rokocoko, Munster’s front-row showed their worth with their impact in the quarter-final against Toulon, and Gerbrandt Grobler is looking more and more the part after his troubled start while the Connacht bound Robin Copeland is probably in the best form of his time with the province.

The conditions should certainly suit Earls, who flourishes in such top of the ground tracks and whose return is a huge boost, particularly bearing in mind how he cut open the Racing defence at the U Arena in January.

“Yeah,” agreed van Graan. “I think it suits the whole team. It’s even hotter than we anticipated. You just had to look at the warm-up, the way the ball bounces. Your back three and the interchange in your kicking game is going to be crucial with ‘8’, ‘9’, ‘10’ and the back three.

“Obviously, we anticipate a bit of space and the opposition will find some space as well, so for the backs it will be a good opportunity. Hopefully we can turn the opposition, who we respect a lot. They have a lot of quality in that team.

Two weeks and two games in the warm climes of South Africa, and particularly the altitude of Bloemfontein against the Cheetahs, now looks like even better preparation.

CJ Stander, who hosted the squad in his home town of George, described the pitch as “quite hard”, adding: “It’s a pitch that you can play a bit of running rugby on but we’ve been used to that. We’ve been training on an all-weather pitch since the bad weather we had in Ireland. I don’t know if Johann planned it, but it worked out and I think it’s like the pitch they have [at the U Arena], so it’s something we’ve all be used to.”

3 Serena Williams has her say on Australian Open quarantine