Jack Carty at fullback for Connacht’s clash with Gloucester 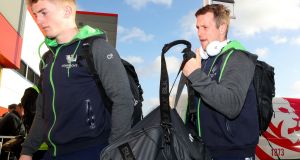 Ireland international Jack Carty is set to start at fullback for Connacht in their Heineken Champions Cup clash with Gloucester on Saturday (Kick-off: 12.45pm).

Carty is part of a back three that includes Niyi Adeolokun and John Porch on the wings. Conor Fitzgerald and Caolin Blade renew their halfback partnership while Bundee Aki and Kyle Godwin start in midfield.

In the forwards, team captain Jarrad Butler will make his 50th appearance in a Connacht jersey. The openside is named in a backrow that includes the returning Eoin McKeon at blindside and Paul Boyle at number 8.

Having played all 80 minutes in his last three outings, lock Quinn Roux steps out so Ultan Dillane and Joe Maksymiw are named to start in the secondrow. While 20 year old academy player Niall Murray is included among the replacements for the first time.

In the frontrow Dave Heffernan comes back in at hooker with Peter McCabe and Dominic Robertson-McCoy at loosehead and tighthead respectively.

Talking ahead of the game, Connacht head coach Andy Friend said: “This is a must win game for us if we are to advance in the Champions Cup this season. We are expecting a big crowd in the Sportsground and we know how difficult it can be to beat us especially when we are at home.

“We have made a number of changes from last weekend with some positional changes and some fresh legs coming in. We have learned a lot from the away defeat and we have picked a side that we feel can beat Gloucester on Saturday”.