Leinster make five changes for the visit of Northampton Saints 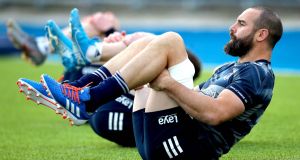 It’s the same back three that played last week in Franklin’s Gardens with Jordan Larmour at fullback, Dave Kearney on the right wing and James Lowe on the left.

There is no change either in the centre with Robbie Henshaw and Garry Ringrose at 12 and 13.

With Johnny Sexton (knee) ruled out earlier this week through injury, it’s a new half back partnership though with Luke McGrath and Ross Byrne starting.

In the pack, Rónan Kelleher misses out on selection through injury (hand), so James Tracy comes in at hooker, with Cian Healy at loosehead and Tadhg Furlong also starting this week at tighthead.

Fardy comes in from the start this week and captains the side from the secondrow alongside James Ryan.

And it’s same again in the back row with Rhys Ruddock, Josh van der Flier and Caelan Doris all retained from the start.

On the bench there is potentially a European debut for Skerries man Ciarán Frawley.

Ireland complete clean sweep of South Africa 21:19
Huw Jones says Scotland players ‘not that bothered’ by Russell’s departure 20:49
Kobe Bryant crash: Questions emerge about why helicopter was flying in fog 19:41
Ireland predicted to win its best ever Olympic medal haul in Tokyo 19:35
Donegal’s Leo McLoone retires from inter-county football 19:24
Here is your handy guide to sport on television this week