Johnny Sexton to see a specialist with knee injury

Leinster outhalf will miss return clash against Northampton this weekend 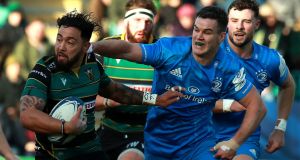 Johnny Sexton will see a specialist on Monday afternoon to ascertain the extent of the damage he suffered to a knee injury during Leinster’s Heineken Champions Cup victory over the Northampton Saints at Franklin’s Gardens. He will undergo a second scan on the joint but the news will be of a concern not just from a Leinster perspective but also an Ireland one.

Sexton was immediately withdrawn after suffering the injury in a tackle from Saints’ centre Matt Proctor. The Irish and Leinster outhalf won’t play against the Saints at the Aviva stadium this Saturday while secondrow James Ryan is also doubtful after suffering a head injury during the Northampton game and will now follow graduated return to play protocols under the supervision of the team medics.

The update on Sexton read that he “has been ruled out of the game this weekend against Northampton Saints following a knee injury. He will require further assessment and is seeing a specialist today for a further scan.”

Joe Tomane had re-aggravated his hamstring injury and will be out of action for six to eight weeks, while Rory O’Loughlin continues to rehabilitate a shoulder injury. In better new for the province Sean Cronin has returned to full training following a neck injury, so too prop Peter Dooley (knee).