End of an era as Bective depart the national stage 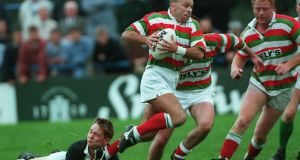 Former international Kurt McQuilkin in action for Bective Rangers against Ballymena. The club featured in Division Two of the All-Ireland League for many years. Photograph: James Meehan/Inpho

On Saturday, Bective Rangers will play their final match in the Ulster Bank League, at lest for the time being, when they host Malahide at Donnybrook.

Relegation from Division 2C means that next season they will play in the Leinster Senior League Division 1A.

It’s been something of a freefall. Relegation has been a regular bedfellow over the last four or five years as they have plummeted down the divisions, marking a downturn in fortune for a club with a proud history. Among their achievements are 12 Leinster Senior Cup wins, the last in 1962, and two Bateman Cups.

The Donnybrook club (founded in 1881) contributed players to the Lions, to Ireland, the first John Waites in 1886 and the last, former Leinster defence coach Kurt McQuilkin 110 years later.

Wales and Lions icon Cliff Morgan played for Bective Rangers in the 1954-1955 season helping them to win a Leinster Senior Cup, while working as a manager at Irish Ropes in Wicklow Town.

They came within touching distance of the old Division One of the All-Ireland League and for a substantial period of time were a mainstay in Division Two. But declining playing numbers, representative of the changing face of club rugby over the past 20 years, took an appreciable toll on a club that perhaps lost its identity along the way. In a sense they dwelt on who they were, took their eye off the ball, rather than recognising the need to constantly evolve in the modern club rugby environment.

Bective Rangers are not alone. Monkstown, Suttonians, DLSP, Naas and Wanderers, all suffered a similar fate in dropping to the Leinster Senior League with only the latter two managing to regain their Ulster Bank League status.

Fergal Campion will step down as head coach at the end of the season with Dave Plummer, a schoolteacher at King’s Hospital, taking over. Earlier this season Campion, roughly 10 years after playing what he thought was his last game, came out of retirement, aged 43, because the team needed him and he subsequently played three matches. On Saturday he’ll start on the bench. He’s promised his wife that it’ll be the last time he’ll lace up the boots.

A lavishly gifted outhalf, he was part of an Ireland Schools team that won a Triple Crown (1993) with Declan Kidney as coach, a member of a St Mary’s College side that won the All Ireland League (2000) and also played for Leinster. His career spanned the amateur and professional eras in rugby.

He spoke about the lack of depth and quality in playing numbers – outside of minis, Bective field U-18, U-20, first, second and third teams.

“The standard in Division 2C is probably the equivalent of J2 in the old days, the commitment to the club isn’t the same, there are other attractions from a lifestyle perspective which is understandable and that includes the professional game. Some players would rather go and watch Leinster than play a junior match; different times.”

There is a belated recognition that Bective require rebranding, that they have to go back into the community, essentially the local schools of which there are many, and sell the club with all its superb playing facilities, complemented by a framework off the pitch that underscores that vision.

It’s about coaching, it’s about youth development and it’s about creating an environment where men and women, boys and girls can enjoy playing rugby, irrespective of the level.

That will be the key to regeneration. If they are to bounce back to Ulster Bank League status, Bective can’t seek refuge in the past; instead they must live in the present and build for the future.

1 Nadia Power determined to push on to the next level
2 College football turns blind eye to Covid-19 by risking players' health
3 Rugby impasse continues as no deal reached in fourth round of IRFU salary talks
4 The Best Of Times: Harrington stares down Garcia in epic Claret Jug battle at Carnoustie
5 Coronavirus has turned Viktor Hovland into long drive champion
Real news has value SUBSCRIBE