Dan Biggar set to make the difference for Ospreys 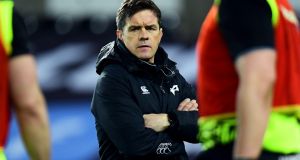 Allen Clarke: “We know that Connacht are a good team, well-prepared and with threats all over the park.” Photograph: Alex Davidson/Inpho

Connacht are a point behind the Ospreys who are in the vital fifth spot in Conference A for the Champions Cup play-off (the Cheetahs lie third in the table but the South Africans are not allowed enter European tournaments just yet).

The Ospreys, with a game in hand, look odds-on to be guided back into Europe by interim coach Allen Clarke, thus all but ending Connacht’s season in the process.

“We are at the point of the season where every game matters now,” said Clarke, the former Ulster and Ireland U-21 coach now working in the Welsh system.

“We respect the importance of this fixture to our aspirations for the season and understand that while the bigger picture is important we have to focus one game at a time. Get too far ahead of ourselves and we’ll come unstuck. We know that Connacht are a good team, well-prepared and with threats all over the park so they have our utmost respect. We have to make sure we are at the level we were against Leinster. That is the benchmark for us for the rest of the season.”

Tipuric is unavailable tonight after linking up with Wales Sevens at the Commonwealth Games but, with Bundee Aki sat down and Connacht reeling after losing to Gloucester in the Challenge Cup last weekend, this game has perhaps arrived too soon.

“Ospreys are in the driving seat in terms of that final Champions Cup qualification spot,” said Connacht defence coach Peter Wilkins. “We see the season as very much alive, but we need to make sure we perform and put them under pressure.”

It being Dan Biggar’s last game at the Liberty, before joining Northampton, the Wales outhalf is expected to prove the difference under whatever pressure is exerted on him.

1 Seán O’Brien: Anger over my parents’ break-up never left me
2 Madness or defiance? The GAA is taking a huge gamble in staging Championships
3 Gibson-Park, Earls and Kelleher all in race to make Ireland’s French finale
4 The Offload: Outgoing Tom Grace will be missed by IRFU
5 Dan Martin keeping it day-to-day as Vuelta proves challenging for riders
Real news has value SUBSCRIBE

Son Heung-min the right man in the right place again as Spurs win at Burnley 22:11
Karlan Grant scores his first West Brom goal to rescue deserved point at Brighton 20:26
Dan Martin keeping it day-to-day as Vuelta proves challenging for riders 19:15
Mercedes’ Wolff hails Hamilton after his record win in Portugal 18:41
Alisson: ‘I believe my faith and working hard helped me in this fast recovery’ 18:21
Crossword Get access to over 6,000 interactive crosswords