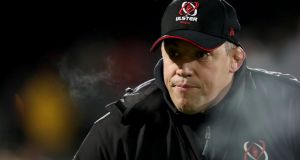 Jono Gibbs: will be heading home to Waikato at the end of thecurrent campaign. Photograph: Tommy Dickson/Inpho

Conference B is about to become a three-way affair between Edinburgh, Scarlets and Leinster. The Richard Cockerill project will be deemed a success with victory over an Ulster squad that this week lost a third player, winger Craig Gilroy, to the internal review process.

Defeat would leave Jono Gibbes with three irrelevant games in charge before he returns home to Waikato. Ulster are 13 points adrift of third-placed Edinburgh, with one match in hand, so Cockerill’s men can reach the new quarter-final play-offs tonight.

“We’ve never qualified for the [play-offs] so we have a little bit of pressure on ourselves to get that right, so we can prove that we are capable of that,” said the former England hooker.

“We’ve got to learn what that feels like and how to cope with that. The best way to do that is to experience it. There is no doubt that we are capable of winning these games. We just need to get it right and go back to our basics around both our physicality and mentality.”

“We have some expectations within the playing group. What I expect is 100 percent commitment.”

If there’s any fight left in Ulster, Rory Best must entice it from his team-mates tonight. Two Academy players, prop Tom O’Toole on debut and Matthew Dalton in the second row alongside Iain Henderson, are named in the pack. There’s another two potential debutants from the bench in Rainey Old Boys prop Tommy O’Hagan and Angus Curtis as Gibbes understandably exposes the next generation to senior rugby before he departs.

That makes it harder to envisage Ulster mustering a performance after all that has occurred off the field in recent months.

“It is a difficult situation but I cannot control any of that stuff and there’s people with a hugely significant level of expertise to deal with things and that is their department,” said Gibbes, who took control of playing matters when director of rugby Les Kiss was removed in January after Ulster failed to reach the knockout stages of the Champions Cup.

The Pro 14 play-offs, expanded this season to include six teams, now appears out of reach but they do have Champions Cup qualification, and its significant financial windfall, to play for in their remaining home fixtures against Ospreys and Glasgow with the season ending in Limerick on April 28th.