Forgettable season meandering to a halt for Kieran Keane’s squad 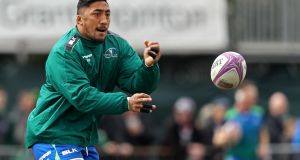 Bundee Aki: returns to the Connacht line-up for the visit to Glasgow Warriors. Photograph: Tommy Dickson/Inpho

Connacht’s last clinging finger is about to be prised off a campaign, the first under coach Kieran Keane, that will be remembered for next to nothing (granted, two victories in France is something).

Glasgow must and should deliver in front of a packed Scotstoun if they are to fend off Munster and top Conference A, thereby skipping the new quarter-finals and securing a home semi-final.

Connacht forwards coach Jimmy Duffy, via a press release, makes a hollow defence to the contrary.

“We are definitely targeting victory against Glasgow. It will be a huge challenge, and after their loss at the weekend [26-8 at Scarlets], they will be gunning for us, so it’s going to be a competitive fixture.

“We have been within range of a lot of teams this year which shows we are competitive,” Duffy added, “but we are looking for continuous improvement and that is the driving factor. We need to express ourselves and realise our potential.”

What that potential has become is increasingly difficult to identify. Murrayfield in May 2016 seems like a lifetime ago. Six wins from 19 league outings and a clear-cut defeat in the Challenge Cup quarter-final is how far they have sunk on Keane’s watch.

“Connacht lead the competition in ball carries with the ability to look after possession for long periods of time,” said Glasgow coach Dave Rennie, who Keane assisted at the Chiefs back in New Zealand. “It will be a great test of our defensive resilience.”

Bundee Aki returns but Tiernan O’Halloran, who was cleared on Thursday after being cited under Law 9.12, “a player must not make contact with the eye or eye area,” following an incident with Ospreys’ Jeff Hassler last weekend, is excluded from the match-day squad.

Interestingly, Frank Murphy, the former Munster, Leicester and Connacht scrumhalf (104 caps over six seasons in Galway), is the referee.

Connacht players could be forgiven for storing up whatever motivation remains to ensure the great John Muldoon gets a fitting Sportsground send-off against Leinster on April 28th but highlighting close defeats as evidence of a team being competitive tells us everything we need to know about the current state of affairs out west.

Glasgow and Stuart Hogg to cut loose with the bonus point to be secured before the hour mark.