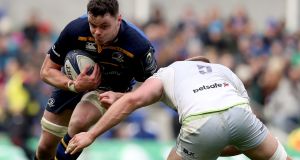 James Ryan: “I was at every Leinster final,” he says. “I was in the Millennium, Murrayfield and Twickenham. They were all class games.” Photograph: Tommy Dickson/Inpho

With James Ryan there is only one person in the room squirming, mildly embarrassed, just one guy furtively throwing a not entirely grateful look across the table. There’s only one character who finds the topic of the rise and rise of James Ryan in international rugby a little OTT and uncomfortable. That’s James Ryan.

Not so long ago he explained that the external stuff, the extraneous matter that comes with success, if he allows it to, could take him outside his process. If that happens he’s compromised.

The hyperbole doesn’t tally with his view of James Ryan and where he sits among Leinster players who, not so long ago, as a schoolboy he venerated.

“I was at every Leinster final,” he says. “I was in the Millennium, Murrayfield and Twickenham. They were all class games. The Millennium was the best one. For me that stuck out.”

More than that, as a kid it gave him belief.

“Yeah. Leinster having that success kind of makes you want to be part of it and drives any young kid to push on. It certainly played an influence for me as a kid.”

It hasn’t yet reached that stage where Ryan and others are yoked with the threadbare cliché of Golden Generation since it was retired with BOD, Darce, Paulie and Rog. He is spared that.

One of a number of young players rooted in the philosophy of Joe Schmidt, Ryan’s inclination is for no fuss. Dan Leavy is another. His try against Saracens was a team affair.

“The ball was just popped to me,” says Ryan. “I saw in the corner of my eye there was a gap there. I knew he was on the inside. It was a bit fluky.”

No fuss. Leavy and Ryan are good friends. They played together for the first time last summer and gelled.

“He’s someone who throws his head into anything really,” quips Ryan. It’s a fair summation. Leavy’s fearless yard dog edge gives him bite. Ryan is cut from similar cloth.

The Leinster and Irish lock’s nickname is ‘Cheese’ and he has yet to lose a senior game of rugby with Leinster or Ireland.

“Of course I have not,” he says, when asked if he has ever called himself ‘The Big Cheese’, acutely aware of the inference of self-regard. “What do you want to know?” he adds. “There is only one truth.”

“It’s from a movie, Why Him?” he explains. “I don’t know if you’ve seen it. The character in that is called The Big Cheese and Max Deegan, Deego, watched it one day and came in and randomly enough he called me Big Cheese out of nowhere.

“A few lads heard it and they found it hilarious and that’s how it stuck.”

Does Johnny Sexton call you the Big Cheese?

“It kind of varies what he calls me, to be honest,” he groans tiring of the subject.

Ryan has played 11 matches with Leinster and eight with Ireland and has won all of them. It is a decent streak that could possibly last until the end of the season.

“It’s a bit jammy to be honest,” he says aware of its value as a distracting talking point.

He can’t remember the last match he lost. But he thinks it was a British and Irish Cup match last season.

You are a proper a lucky charm then.

But the winning streak is important to you.

“No, it’s not important to me,” he says. “To be honest, I don’t even normally think about it. It’s been mentioned a few times. But no, it’s not something that’s at the forefront of my mind.”

This isn’t entirely going where he wants it to go. Lucky charms and nicknames. When he was growing up he drew on aspects of a number of players. But one from South Africa and another from New Zealand caught his eye more than most.

“I used to love [Eben] Etzebeth when I was younger, he was just so physical and abrasive,” says Ryan. “[Brodie] Retallick was another guy I liked. So they’re two, I liked the way they played.”

Ambitious and driven, everything seems to have fallen for him since last year’s summer tour to the USA and Japan, where Schmidt introduced many of the younger players.

“I think it was really important for the lads,” he says. “Japan was great. That put us all in that place before the season started.”

Still in that place, Ryan hasn’t looked back.

1 Gerry Thornley: Wild reactions to this Ireland team as fickle as the wind
2 Caelan Doris and Ronan Kelleher make strong case to start against Italy
3 Dan Tuohy explains ‘rotten to the core’ comments
4 Five Golf Classics for you to tee up at in 2020
5 AFL’s equalisation policies a possible guide for the GAA
Real news has value SUBSCRIBE

Five Golf Classics for you to tee up at in 2020 06:00
Out of the shadows: Floodlights a priority for clubs across Ireland 06:00
AFL’s equalisation policies a possible guide for the GAA 06:00
Murphy confident Donegal remain on the right track 06:00
Caelan Doris and Ronan Kelleher make strong case to start against Italy 06:00
Here is your handy guide to sport on television this week