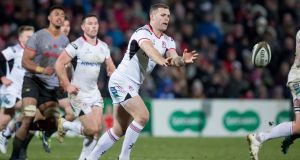 Ulster’s Darren Cave has signed a contract extension keeping him with the province until the summer of 2019. Photograph: Morgan Treacy/Inpho

Ulster’s season can still end with a place in the Guinness Pro14 knock-out stages and direct qualification for next season’s European Champions Cup, a play-off for the latter, or consignment to the Challenge Cup. This game will go a long way towards determining which of those three scenarios come to pass.

Currently fourth in Conference B, victory would eat into the eight-point gap to Edinburgh, who occupy the last place in the Pro14 play-offs which provides direct qualification for the Champions Cup. Tomorrow, Edinburgh host second-placed Scarlets, while Ulster host Glasgow next Saturday in their re-arranged game in hand.

However, a defeat here would keep Benetton, currently a point back in fifth, breathing down Ulster’s necks. A fourth-placed finish would ensure a Champions Cup qualifying play-off at the Kingspan Stadium, most likely against tonight’s opponents.

Interim, and departing, head coach Jono Gibbes calls up props Callum Black and Ross Kane, lock Kieran Treadwell and number eight Sean Reidy, with Jean Deysel switching to openside. Darren Cave, who yesterday agreed a contract extension until the summer of 2019, features in an unchanged backline. The 31-year-old made his debut in a 33-9 win over Border Reivers in April 2007 and is currently Ulster’s third most-capped player, having made 208 appearances and scoring 44 tries.

For his part the Ospreys interim head coach Allen Clarke, on his return to his old stomping ground, makes three changes in personnel and one interesting positional switch, with Alun Wyn Jones, on the occasion of his 150th game for the region, at blindside. Lock Adam Beard and tighthead Dmitri Arhip are promoted, as is centre Owen Watkin in place of the hamstrung Ashley Beck.

He joins a casualty list of 19 players which also includes Cory Allen, Scott Baldwin, Rhys Webb and Dan Lydiate, while Justin Tipuric and Tom Williams are in Australia with Wales 7s at the Commonwealth Games.

The Ospreys would need to overtake Cardiff, whom they trail by eight points with a game in hand, to secure direct qualification for the Champions Cup. They are the form side in the Pro14, having won six of their last seven, albeit the last five have been at home. The two sides have shared 14 wins apiece in their 28 league meetings, although the Ospreys have lost on their last four visits to Belfast.

Tonight’s game will be preceded by a demonstration outside the Kingspan Stadium, entitled “Stamp out Misogyny at Ulster Rugby”, which is being organised by the Belfast Feminist Network.

It is the second rally organised by the group since the Belfast rape trial verdict on March 28th, when the Ulster and Ireland players Paddy Jackson and Stuart Olding were found not guilty of raping the same woman at Jackson’s home in June 2016. Jackson was also acquitted of sexual assault.

Belfast Feminist Network said: “This rally is not about the future careers of the players currently suspended. We are sending a message that there needs to be action taken by Ulster Rugby and other institutions to stamp out misogyny.”

Since the legal process began, both players were “relieved of all duties” with Ulster and the IRFU, who have been conducting an internal review since the trial concluded.

Meanwhile, one of Ulster Rugby’s main sponsors, Bank of Ireland, has said it is “highly concerned” by issues arising out of the rape trial and that they have conveyed its concerns directly to Shane Logan, the chief executive of Ulster Rugby. The bank’s logo adorns the Ulster shirt, and they have been sponsors for 20 years.