‘We might have had a lot of luck today . . . but we took our opportunities’ 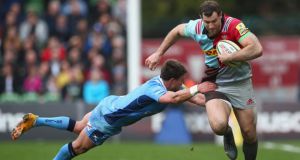 London Irish boss Declan Kidney played down the impact of the club’s new coaching staff as they recorded their biggest win of the season with a 35-5 success over Harlequins at The Stoop.

Piet van Zyl went over for two tries with Max Northcote-Green and Tom Fowlie also dotting down, while Tommy Bell kicked 15 points from the tee.

Jack Clifford got Harlequins’ only points of the afternoon as Danny Care and Charlie Matthews both got shown yellow cards in the second half of the Aviva Premiership contest.

The former Munster and Ireland coach said: “We’ve enjoyed working with the boys the past two/three weeks and all we’re trying to do is add value onto what we had before.

“I’ve reiterated we haven’t done a lot, just tried to build on the work that’s been done already. We might have had a lot of luck today, where a few passes stuck, but we took our opportunities.

“They had been knocking on the door before and it goes to show if one or two of those matches had gone their way the league table would be a different picture.

“We’ve just had an attitude of taking each game as it comes and not to worry about the bigger picture like league tables.

“We can’t do anything about it besides take it match by match and then see what happens to us at the end of the year.”

The visitors raced out of the blocks with three tries in the opening half hour as they recorded the double over London rivals Harlequins to back up their opening day success.

Fowlie added the bonus point score after the break, minutes after Harlequins had got themselves on the scoreboard, but there was no sign of any real comeback.

And director of rugby John Kingston was furious at the full-time whistle with his side sitting ninth in the league table and 17 points off the top six.

“We’ve got to dust ourselves down and, as I just said in the dressingroom, it’s not acceptable.

“The one thing you can’t do in life is feel sorry for yourself, You’ve got nowhere to go.

“I’m going to have a good look at this and see where we go from there.

“We never got going, Irish played well but we were lethargic really from the start. Then it got worse and discipline again was an issue.

“I understand why players want to go off and solve the world on their own when it’s not going well, but it never works, particularly in team sport.”

Five Golf Classics for you to tee up at in 2020 06:00
Out of the shadows: Floodlights a priority for clubs across Ireland 06:00
AFL’s equalisation policies a possible guide for the GAA 06:00
Murphy confident Donegal remain on the right track 06:00
Caelan Doris and Ronan Kelleher make strong case to start against Italy 06:00
Here is your handy guide to sport on television this week