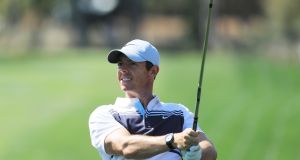 Rory McIlroy believes the world rankings should be used to decide the European Ryder Cup team if not enough events can be played ahead of September’s tournament at Whistling Straits. Photograph: Matt Sullivan/Getty Images

If all the signs are that golf at the Olympics will be given a mulligan this year (with Australia and Canada already making known their intent on keeping players away from Tokyo), the odds on the Ryder Cup going ahead are slightly better . . . although the qualifying system in place for Whistling Straits in September would possibly require restructuring if it does ultimately get the green light.

In fact, Rory McIlroy – speaking to Golfweek magazine – has come up with the suggestion that the points in the bag so far be thrown to the wind and that the world rankings at a cut-off date ahead of the match be used to determine who makes Europe’s team for Wisconsin.

As McIlroy put it, “I would say the simplest thing would just be to go off the world rankings, just choose the top 12 from the world ranking or the top nine and then obviously Pádraig [Harrington] has three picks.”

So, who would be the fall guys should McIlroy’s suggestion of nine off the world ranking make it?

In such a scenario, the chopping and changing would – as it currently stands – see three players fall by the wayside: Victor Perez, Danny Willett and Lee Westwood. Into the team, off the world rankings, would come: Justin Rose, Shane Lowry and Paul Casey.

Rory McIlroy is going to remain as world number one for the foreseeable future, although it won’t add to his career total of 101 weeks at the top of the pile.

A decision has been made to pause the official world rankings for men and women for an indefinite period until tournament play resumes.

In a statement, the governing boards of the OWGR and Rolex WWGR confirmed the rankings would be “frozen” as the bodies “continue to monitor the impact of coronavirus Covid-19 . . . and announcement about the resumption of each respective ranking will be made in due course.”

McIlroy returned to world number one on February 9th last and his six-week stint up to the freezing of the rankings means he has held that top spot for a total of 101 weeks in his career, with only Tiger Woods and Greg Norman ahead of him in the career rankings.

South Korea’s Jin Young Ko is the incumbent women’s world number one in the Rolex rankings.

All of the main professional golfing circuits have been put into shutdown for the foreseeable future.

On March 24th, 2002, New Zealander Craig Perks – ranked 203rd in the world – pulled off the greatest win of his career when capturing the Players Championship at Sawgrass. Indeed, it was the ONLY professional win of his career. Perks made a sensational finish – chipping in for eagle on the Par 5 16th and chipping in again for par on the 18th – to claim a two-stroke winning margin over Stephen Ames.

“I drove it all over the golf course and I missed putts that I didn’t think I could ever miss. I felt if I could just hang in there, just never know what could happen. I never dreamed that I’d finish 3-2-4, the way I did, and it obviously worked out,” Perks said.

That would be the number of tournaments scheduled for the European Tour, the Ladies European Tour, the PGA Tour and the LPGA Tour for the next month as the main circuits go into lockdown . . . and the amount of salary which PGA commissioner Jay Monahan won’t take, having declared he won’t take a single cent while players are in limbo.

Guys I know it’s difficult but if we all listen and distance ourself and not gather in groups we can stop the spread. I’m seeing so many videos of selfish, disrespectful people who think this is a joke. If you don’t listen this will spiral out of control even more – Ian Poulter spreading the word on safety during the corona virus crisis.

Please everyone respect the people around you and try to stay home and limit the amount of people you have contact with, this virus is not a joke #IStayAtHome – Irish Open champion Jon Rahm playing it safe.

Jon, though it’s still planning to go ahead, there’s every chance it might not happen. So how are you going to sleep at night knowing you might not win another Irish Open this year? – Eddie Pepperell bouncing the ball for Jon Rahm, as a serious doubt hangs over the DDF Irish Open at Mount Juliet.

Well clearly I’ve succeeded on unique links golf courses, they want to give me more time to get used to a parkland course!! – Rahm firing the ball straight back at the Englishman.

Seeking to determine if his ball has been damaged, Player A marks the spot on the fairway and lifts his ball that has grass sticking to it and throws it to his caddie who catches it with a towel. Although it is determined there is no damage to the ball, it is clear and obvious that the debris originally attached to the ball was been removed in the act of the inspection. What is the ruling?

Player A is in breach of Rule 14.1c/1 (Player must be careful when lifted ball may not be cleaned) and subject to a one-stroke penalty. A ball lifted from the putting green may always be cleaned but, elsewhere, there are a number of limits on such an action. For example, under rule 14.2c(1), a player is not permitted to clean the ball to see if it has been cut or cracked. In this instance, the player’s act of throwing the ball to his caddie during which debris has been removed is deemed to be a breach of the rule.