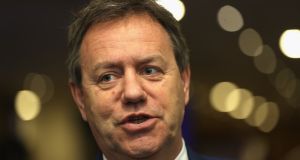 Simon Halliday: “It may be that hard choices have to be made, which is why it gives us a wonderful opportunity to all work together, rather than approach this on our own.” Photograph: David Rogers/Getty Images

The Welsh Rugby Union (WRU) has warned its clubs it is likely to be “months rather than weeks” before the season resumes in Europe and added it expects to make a substantial financial loss this year.

The WRU last week suspended all rugby in Wales until the end of the month but it is set to extend that indefinitely with restrictions on social gathering being implemented.

“It is not clear when we will be able to resume playing,” said the WRU in a weekly update to clubs.

“The indications are it will be months rather than weeks before we are able to do so. The union is forecasting a significant drop in revenue from international and club competitions and our stadium events programme is uncertain.

“As a consequence, we will make a substantial loss and we are forecasting a knock-on impact into the next financial year at least. We expect it to take time for our operations to return to business as usual.

“We have taken time to assess our options and we have been engaging with all stakeholders, other unions, clubs, districts, the Welsh government, regions, sponsors and broadcasters, to build an accurate picture.

“We have reduced our costs and will provide funds to all clubs of £1,000. We are working with the boards of all international and club competitions to share options for when the season is able to resume and we are talking to our bankers to determine what assistance they can provide to Welsh rugby as a whole. These are testing times.”

The independent chairman of the Champions Cup, Simon Halliday, has called on unions and clubs to formulate a joint plan.

“This is a chance for those involved in running the game to not do their own thing when it comes to working out what will happen when fixtures start again,” said the former England centre.

“Otherwise it will be a case of robbing Peter to pay Paul. My board held a conference call this week to discuss the future of this season’s European competitions and on the line were the chief executives of all six unions and all three professional leagues. Keeping that contact is the way forward.”

If the shutdown lasts for months, a problem for EPCR is that the draw for next season’s competitions is due to be held in July based on the finishing positions of teams in the three leagues as well as the winners of this season’s tournaments.

With summer tours under threat because of the restrictions on travel throughout the world, a leaked memo from the New Zealand Rugby Union to its Super Rugby sides said it did not expect Wales or Scotland to be cleared to enter the country this summer, there may be scope for the domestic season to be extended.

“This is an unprecedented time and it requires clear thinking,” Halliday said. “It may be that hard choices have to be made, which is why it gives us a wonderful opportunity to all work together, rather than approach this on our own. Rugby has lacked a collaborative approach and it is possible we can come up with something collective that will work in the future.”

The fear of some clubs is that broadcasters and sponsors may seek a rebate if the shutdown is extended.

“I cannot see that happening,” Halliday said. “A potential consequence of that would be clubs becoming insolvent and whose interest would be served by that? Certainly not television. We will get through this together.”