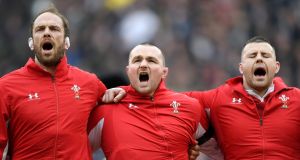 Jones’ 148th Test, a tally that includes nine for the British and Irish Lions, matches the figure set by New Zealand’s World Cup-winning captain Richie McCaw between 2001 and 2015.

Hill, who makes his first Wales start since February last year, replaces Jake Ball after he suffered a shoulder injury in the England game.

John, meanwhile, takes over Dillon Lewis, Jones is in for Rob Evans and Webb is preferred to Tomos Williams.

Webb, who was unavailable for Wales during his time with French club Toulon because he did not meet the minimum 60-cap eligibility rule for players plying their trade outside Wales, has not started a Test since November 2017.

This season’s tournament will be adjourned after events in Cardiff due to the coronavirus outbreak, with three games outstanding — Ireland’s fixtures against Italy and France, plus England’s trip to Rome.

Wales will aim to avoid a fourth successive Six Nations defeat, which they have not experienced since 2007, while Scotland last won in the Welsh capital 18 years ago.

Pivac paid tribute to his captain, stating: “Alun Wyn is one of the most iconic figures in the game, he is our leader and I am delighted for him as he continues to set the bar across the game.

“Saturday is a great opportunity for us to wrap up the campaign with a big performance at home in Cardiff.

“We want to finish with the performance we know we can deliver and we have been working hard to get there.”

Hooker and vice-captain Stuart McInally, number eight Magnus Bradbury and secondrower Sam Skinner come into the side, with the latter starting for the first time in the campaign.

Townsend has named the same back division for the third match in a row, with captain Stuart Hogg set to move into joint seventh place on Scotland’s all-time appearance list, overtaking Greig Laidlaw and John Barclay to join Jason White and Nathan Hines on 77 caps.

Scotland head into the game in Cardiff on the back of an impressive 28-17 victory over France at Murrayfield which ended the visitors’ hopes of the Grand Slam.

“We set out this season to improve our consistency over a run of five tough games, something we have done well so far,” Townsend said.

“We’ve stayed in the fight in every game, which is a credit to how hard the players have worked in training and during the Tests.

“It’s also been encouraging to see how well the players have grown together and have taken on board the input from new coaches, Steve (Tandy) and Pieter (De Villiers), who have done a great job in their first season with the team.

“We have huge respect for the Welsh team, who narrowly missed out on a World Cup final a few months ago. They are well coached and have some outstanding players.

“It will be a fantastic occasion and one last opportunity to play to our potential in this championship.”

Tottenham borrow £175m to see them through Covid-19 crisis 17:13
Royal Ascot prize fund almost halved despite six extra races 16:53
The Irish Times shutdown sports quiz: Part one 16:15
Rafa Nadal says he would not travel to US Open in present circumstances 16:33
Premier League to allow five substitutions per team when games resume 14:34
Here is your handy guide to sport on television this week