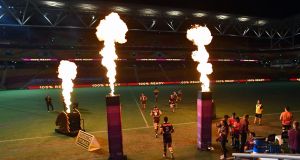 Australia’s rugby league competition, the NRL, has suspended its season, having played until Sunday.

At a media conference, chief executive Todd Greenberg said: “The advice has changed and as it does, so do we. We have made the unprecedented decision to suspended the 2020 season. We would not have reached this point had the situation not changed so dramatically.

“Our priority is to give our game the best chance of a long and sustainable future.

“We have asked players not to turn up for training tomorrow. There will be a lot of uncertainty amongst players and we will try and give as much support as we possibly can. NRL’s office is closed until May 1st and all staff ave been asked to take annual leave immediately.”

Australian Rugby League chairman Peter V’landys said the decision would have “catastrophic” consequences for the sport.

Greenberg added he was confident the season would resume, but noted a “much broader issue facing our country”.

Over the weekend the AFL season was suspended after just one round. It had already been cut from 23 rounds to 17, with all 18 teams to play each other once and games to be played in empty stadiums “for the foreseeable future”.

The league still intends to complete the season and will convene this week to work out a plan. The AFLW has been cancelled outright after just one week of finals, with the final match of the season played between Carlton and Brisbane on Sunday. Given the twin conference structure of the AFLW and with the finals series not completed, the AFL commission decided not to award a premiership this season.

The VFL season, along with other state leagues including the SANFL, WAFL, NEAFL and TSL - and their associated women’s competitions - have been postponed until at least May 31st.