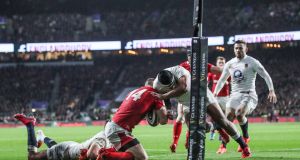 Wales’ George North tackled by Manu Tuilagi of England which led to the England player being sent off. Photo: James Crombie /Inpho

In the disappointing reality of having no matches to comment upon, much is being written about disciplinary issues – no bad thing.

Here’s my take on a few of these.

Firstly, following Eddie Jones’ outburst aimed at referee Ben O’Keefe, which clearly was an accusation of cheating on the part of the referee, the English have, at last, produced a statement.

It says that they, and Jones, regret any implication that O’Keefe was biased and have asked the Six Nations and World Rugby to pass on their apology. It’s not a direct apology, and it’s not particularly wholesome or sincere. It also lacks any direct quote from the coach which is, of course, no surprise.

Mind bogglingly, they conclude with – “all parties are satisfied that the matter has been dealt with appropriately . . . and consider the matter to be closed.” So, the RFU speaks for the Six Nations and World Rugby on this issue, some power grab there?

Their statement also advises us that they have proposed a high level forum to help achieve greater alignment between coaches and match officials. Good chaps, well done. You really couldn’t make it up.

If those two bodies have allowed, or agreed, that to be the conclusion of the matter, absolute shame on them. Jones’ comments are utterly unacceptable, and it is pitiful if the RFU can get away by sweeping them under their well worn carpet with this sort of response. We need to hear from the Six Nations and World Rugby on this matter. It’s time for positive action and leadership. Silence condones.

Where is the governance, where is the chairman, where is the CEO, and how can a union be allowed to exculpate its own errant coach? It’s not hard to imagine what punishment would have been handed out if the referee had lambasted the coach in a similar fashion.

Don’t forget that during the World Cup the Scottish Rugby chief executive, Mark Dodson, issued a threat of legal action if their match with Japan was cancelled. The match did go ahead and a Japan victory sent them home. You could easily see Dodson’s words as ill-advised, but understandable given the implications that cancellation would have meant going out without the chance to play.

But the Scots were slapped with a £70,000 fine, and told to write a meaningful apology. Dodson’s words were deemed to have amounted to misconduct, and to have brought the game into disrepute. And Jones’ didn’t? Nonsensical. Remember also that it’s his second offence, following his “brutal physicality” threat prior to England’s defeat in Paris.

It seems it’s a case of if you upset World Rugby directly they’ll be as heavy handed as they see fit. Bring the game into disrepute by threatening opponents and verbally attacking the referee, and, well, they’ll look the other way, and anyway the RFU have spoken. But seriously, it is serious.

If that attitude feeds its way down through rugby, you won’t find a referee in sight – they’ll have ‘gone fishing,’ and nobody could blame them.

Now, an easy one. Courtney Lawes’ citing was not upheld by the judicial committee – their decision was that it did not meet the red card criteria. Fair enough.

Following Manu Tuilagi’s shoulder-smash to the head of George North, he briefly embraced North before leaving the pitch. This led to a reduction in his sentence by the judiciary, as immediate remorse is considered praiseworthy. Maybe it should not get such a high weighting in the final sentencing.

The judicial panel correctly upheld the red card, then the next thing they had to do was to decide what level of offence had occurred. They decided it was mid-range which has an entry point of six weeks, this was reduced by two for the remorse and good conduct which were deemed mitigating factors. So, the suspension period netted to four weeks. But Tuilagi, while admitting foul play, did not agree it was a red card offence – is that not a serious aggravating factor?

Another question is what on earth does a player have to do for his action to be deemed at the top-end of seriousness? If so, this case would have seen the entry point at 10+ weeks.

It might also have sounded better to Joe Marler, who may be scratching his head at his own 10 week suspension (which is probably about right) when he compares it to four weeks for his teammate.

Two of the three person judicial panels were common to both hearings. I’m sure the incongruity of those sentences relative to the player actions won’t have been lost on them. In either case, it’s hard to blame the judiciary – in Tuilagi’s case they followed precedent. For Marler, the panel applied the low level entry point for his offence.

But it all does point to a compelling need to review the whole system, including the areas of mitigation. Good behaviour at the hearing should be a given, not a mitigating factor. If remorse is also a reason then, of course, there will always be remorse. These factors are allowed to reduce the period of suspension by up to 50 per cent which is very often the decision. It’s far, far too much.

The punishment must surely fit the crime, and be a deterrent.