Australia’s NRL to continue season unless told otherwise by government 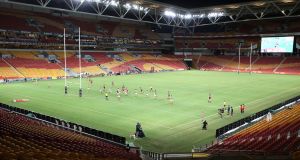 The National Rugby League has vowed to continue with their season amid the coronavirus pandemic until the Australian government advises them not to.

The NRL began its season behind closed doors last week and ARL chairman Peter V’landys stated the intention is to proceed with the competition until they are encouraged to shut down matches.

Australian Rules football had earlier this morning announced that their season would be suspended initially until the end of May due to the pandemic.

Former Australian rugby league captain Brad Fittler believes the AFL’s situation is different to the NRL’s predicament because their competition is played in more states.

“There is a difference between the two sports in that we do a lot less travel than the AFL. If there is some sort of way the NRL can go forward that would be on the back of that,” Fittler told Channel Nine.

“They (the AFL) have got two teams in Western Australia, two teams in South Australia, Brisbane, Sydney and Melbourne so it takes a lot of travel. If there is an advantage to the NRL it would be the fact that it is predominantly played in two states.

“I know that there is a huge meeting that is going to go on tonight and I am gathering what happens there is going to be the decider about whether the NRL goes forward and plays any games.”

Australian prime minister Scott Morrison announced the government would work with both the NRL and AFL moving forward.

“I would say not. It’s not the end of sport.” Morrison said in a media conference.

“I’m sure we can work with both of those agencies with their respective states and CMOs (chief medical officers) at a federal level.

“If there are new arrangements that need to be put in place to protect the health and safety of everyone they may be possible but I’m not going to pre-empt those outcomes, but I’m sure we can work those issues through on a practical case-by-case basis.”