The Offload: Keeping up with the petitions as Leinster Schools Cup final is postponed

Rob Kearney left in contract limbo, Jamie Roberts does his bit for the NHS in Cardiff 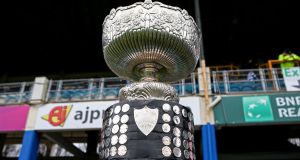 The Leinster Schools Cup finals have been postponed due to coronavirus. Photograph: Laszlo Geczo/Getty

Keeping up with the petitions

It is difficult to keep up with the petitions. First came the petition that demanded the Leinster Schools Cup finals to go ahead despite, the British Open Golf, French Open tennis, all of rugby and probably the Olympic Games getting postponed because of Covid-19. Next came the petition to ‘remove the abhorrent petition’ to play the final.

“All four finalist teams and all those associated with their respective schools are disappointed and outraged. There is no reason whatsoever why these games should not be held behind closed doors to determine a winner,” bellowed the original petition. No reason?

“This is a matter of great pride for all those involved with the respective schools - not to mention the biggest match of a lot of these players’ careers, should they be a sixth-year student. We, therefore, demand the finals to be played at some point in the future.”

“Some clearly immature, self important young men have demanded that a sports tournament be completed in order to boost their already inflated egos and to please daddy, no doubt,” it said before losing some of its fire power with the sign off.

You sometimes wonder why parents spend so much money on their children’s education. The original, which appears to have been removed, seemed authentic. Then again could it really be? Are even teenage boys that irredeemably stupid and have they abandoned all common sense to that degree? Or is it just the magic of the cup.

Last May, the IRFU announced fullback Rob Kearney had agreed a new deal until the end of the 2019-20 season. Kearney then confirmed he had received a nine-month contract extension, despite looking for a new two-year deal.

On his new deal, Kearney said: “I am feeling pretty good about where I am physically and mentally after a long season which has contained a few lows but also some massive highs.”

The IRFU performance director David Nucifora chipped in “Rob has contributed a huge amount to Irish Rugby and has performed at a high level again this year for Ireland and Leinster. We are delighted that he will continue his career in Ireland in what will be his 15th season as a senior pro.”

But what of the fullback now and the rest of players that are out of contract, which across Munster, Leinster, Connacht and Ulster easily runs to double figures. In effect Kearney and others such as Joe Tomane now have no opportunity to play their way into another contract position for next season.

Tomane, who signed a two-year contract in 2018 started badly with a difficult hamstring injury after coming from Montpellier. Just as the former Australian international was living up to reputation and beginning to impress have we also seen the last of him too?

Kearney started just three matches this season against Lyon, Ulster and the Cheetahs and came off the bench in five other games. For a player who has lined out 95 times for Ireland and 218 times for Leinster, the year has unraveled into a state of chaos.

What a shame it would be if the virus closed down rugby until next season and players like Kearney were left swinging.

“I managed to get an A&E doctor in there as of Friday, someone who’s working on the front line with the NHS in Cardiff.” - Currently in South Africa with Stormers Jamie Roberts, one of the very few who have managed a professional rugby career while qualifying and working as a medical doctor, makes use of his empty flat.

Damian de Allende, the Springboks’ World Cup winning centre, has agreed a two-year deal with Munster. The Irish province and head coach Johann van Graan certainly pulled off quite a coup in acquiring the power house talent, who was supposed to be joining from the start of the 2020-2021 season.

With 47 caps for the Springboks since making his debut in 2014, de Allende spent the last six seasons with the Stormers in South Africa but then took up a contract with Panasonic in Japan for the rest of the season. The World Cup winner was due to join up with his Munster team mates this summer.

Lock RG Snyman, 24, has made 23 appearances at international level and also plays his club rugby in the Japanese Top League with Honda Heat. He too was chalked up to come over to Munster to help drive the province back towards the top of European rugby.

With everything in the air, their early arrival now looks to be at risk. It’s only March but Japan are reportedly discussing preparations to delay the Olympic Games, which are scheduled to begin on July 24th.

According to the government website gov.ie anyone coming into Ireland, apart from Northern Ireland, will be required to either restrict their movements or self-isolate on arrival for 14 days.

Famous as they are for lifting the Webb Ellis trophy last year in Japan, they will not get any leeway. Munster’s next season has gotten even more complicated than they could have imagined.