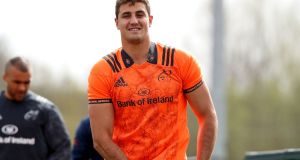 Gerbrandt Grobler: joined Munster last summer but his past history and presence in Irish rugby prompted an outcry in January. Photograph: Inpho

Although the IRFU have said a “zero tolerance” policy exists in relation to players convicted of taking performance-enhancing drugs, in the wake of the Gerbrandt Grobler affair, David Nucifora has confirmed the union’s stance is not necessarily that intolerant.

“We’d look at it and we’d look at the individual case of what’s happened. I think it wouldn’t be smart to put a stamp and say ‘anyone who has had a doping conviction cannot play rugby here’. That wouldn’t make any sense whatsoever, so I think moving forward you continue to look at it on a case-by-case basis.”

“That’s the only way you can deal with those things because they’re all different. A doping offence – yes, that’s the title – but you look into the doping offence and there are myriad of different things that can lead to a doping offence. None of them are good, obviously, but they all have their own set of circumstances. Each one of those would need to be examined.”

“Rugby itself and Irish rugby, particularly, puts a lot of time and effort into education around it, so there’s other sides to it too. As a young man, he made a mistake at the time. Do we rub him out and he never plays again? I think when you look into the circumstances and weigh up the individual, then you make a decision. Not everyone will agree with it, obviously, not everyone did, but there’s also room to say ‘some people do deserve a second shot.’

Grobler incurred a two-year ban for taking the anabolic steroid drostanolone while injured in 2014, but as to what those “circumstances” were, Nucifora said: “I don’t really want to go into it but it was more to do with injury and contracts and scenarios around that. The decision was made by the player, again, so he’s moved on to Gloucester and he’ll continue his rugby career over there.”

Although Grobler had returned to rugby after his suspension with Racing for a season, and joined Munster last summer, his past history and presence in Irish rugby prompted an outcry in January.

That a two-year ban is an insufficient punishment, or deterrent for deliberately taking illegal performance enhancing drugs, is undeniable. That’s not Grobler’s fault mind, and the nagging suspicion remained that he was an easier target coming from abroad, and that were he Irish he’d have been more readily given a second chance.

Be that as it may, Munster and the IRFU could have handled his signing better, and had Grobler been used to educate players, there might not have been the same vilification of him.

But once that time passed, as Nucifora said: “I think it just got overwhelming to the individual, to be honest, the reaction. He just made the decision that ‘I want to go’. It wasn’t really an issue for us after that.”

Cheltenham controversy will wash off magnificent triviality of horse racing