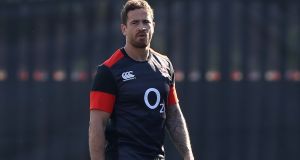 Danny Cipriani has been named in England’s squad for the second Test against South Africa. Photograph: David Rogers/Getty

England have dropped Chris Robshaw and included Danny Cipriani on the bench for Saturday’s second Test against South Africa. Brad Shields will make his first Test start in place of Robshaw in the backrow, the fit again Joe Launchbury returns in the secondrow and Cipriani replaces Piers Francis in the matchday squad.

Robshaw, 32, has largely been a permanent fixture in the backrow under Eddie Jones and his predecessor Stuart Lancaster but does not even feature as a substitute. After 65 caps for his country, including 42 as captain, the loyal Harlequins flanker has been superseded by the New Zealand-reared Shields who has yet to play a single Premiership game.

“Based on South Africa’s likely selection of an extra lineout jumper, we’ve decided to start with Brad Shields which improves our lineout,” explained Jones. “It’s tough on Chris Robshaw, who has been an outstanding player for us, but I know he’ll bounce back.”

Cipriani has not previously featured in a Test under Jones but has had a fine domestic season and, for the first time since the summer of 2015, has been given a chance to resurrect his stalled international career. There is also a place on the bench for the Newcastle forward Mark Wilson, with Nick Isiekwe dropping out.

“Danny Cipriani will come on to the bench, we’re looking for something a little bit different which he can bring,” said Jones. “He’s been training well and doing everything that’s asked of him. Bloemfontein is a very fast ground at altitude. It has an average of 60 points per Test match so we are anticipating an ebb-and-flow type game like we had in Johannesburg.

“We have come here to win the series against South Africa and the squad is ready to go out and beat them this weekend. We have had a very good preparation this week and the intensity and executions in those sessions are going to put us in a good position for Saturday.”