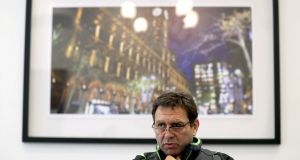 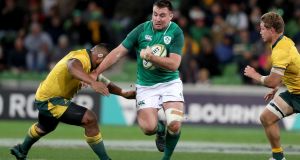 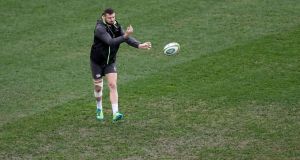 Robbie Henshaw is a product of Connacht but has flourished at Leinster. Photo: Dan Sheridan/Inpho

All roads, and the IRFU’s primary playing strategy, lead toward the 2019 World Cup in Japan. Rightly so, too. The Ireland international squad is the most important in Irish rugby. It is, indeed, the product of the four proud provinces and, by any yardstick, it’s bigger than them too.

The two Grand Slams of 2009 and this year supersede the seven Heineken Cup/European Champions Cup wins by the provinces. They unite the country’s rugby fans and generate a national fervour in a way none of the provinces can do.

The World Cup is therefore the ultimate tournament, and so is given primacy by David Nucifora, the IRFU High Performance Director, and Joe Schmidt. It is framed by what happened in the 2015 World Cup, when a combination of injuries and a suspension meant Ireland went into their quarter-final against Argentina without five of their most important players.

It was a toll which would have even tested the All Blacks had a similar quintet of key players – say Brodie Retallick, Richie McCaw, Kieron Reid, Dan Carter and Conrad Smith – been ruled out in the same week.

But thereafter, Nucifora, who has been afforded more power by the IRFU than any one individual in the union’s history, along with Schmidt, resolved that Ireland’s squad depth would be better able to cope with the loss of players come Japan in 15 months’ time.

That’s fair enough. This Irish team/squad is on the verge of becoming the most successful in history too, but to do that it needs to go where no Irish team has ever gone before, namely the glass ceiling that is the World Cup quarter-finals.

Mindful that Ian Madigan had only started six games at outhalf in the year before that quarter-final against Argentina, so it is that Joey Carbery was encouraged to move out of Johnny Sexton’s shadow at Leinster. Accordingly, his move to Munster should see him garner altogether more experience in that role.

So it was that Nucifora blocked Munster’s proposals to sign Stephen Moore after the back-to-back European defeats to Leicester two seasons ago. Given the difficult night Niall Scannell had in the first of those games – the 31-19 defeat at Thomond Park – it seemed a reasonable request by the province to imbue their pack with some experience.

Scannell’s seven caps last season, and his strong showing last Saturday on his return to the team, was vindication of that.

Nucifora and the IRFU copped a huge amount of criticism, especially in Ulster, for his decision not to grant Ruan Pienaar a new contract after seven seasons there. It still grates, but Nucifora was entitled to note with irony that on his last visit to the Kingspan Stadium, when Ulster secured a place in next season’s Heineken Cup with their playoff win over the Scarlets, the crowd were chanting John Cooney’s name. “I was thinking ‘am I really here’?” said Nucifora. Cooney’s presence here is also vindication for Nucifora’s stance.

The process is gathering pace. Next season, Jordi Murphy is being repatriated to Ulster, as is Marty Moore, with Tadhg Beirne repatriated to Munster, and that will assuredly benefit both provinces and most of all Ireland.

“I don’t think we need a complete draft system,” says Nuicfora. It is about “making sure that the right players are getting appropriate game-time – because as much as there is the strength of parochialism, it can also be our biggest challenge. We’ve just got to manage it.

“No one wants to take away the identity of the teams but at the same time it’s no good us sitting back in 2019 having a whinge about why something didn’t work and why we got knocked out in the quarter-finals again.”

Nucifora does stress it’s ultimately down to the players themselves.

“Our system is dictated by what the players want and unless the player wants to go, he is not made to go anywhere. He has to want to go. All we can do is create a system that shows him the opportunity.

“I just think it’s a balancing act. I am certainly not shy about saying that is what we have to do, because I have said it all along: respect what we have got, respect the history of the provinces but we can’t let that get in the way of where we’re going and what we want to do. The players get that. If they want to be in situations like Saturday night is going to be, they know that if they make poor choices, then they jeopardise that.”

He’s strong-willed, has a clear vision of what he wants to achieve, and has ruffled a few feathers seemingly wherever he has gone. Not that it seems to bother him remotely. As well as being intelligent and articulate, Nucifora has a thick skin.

Yet the emergence of the provinces as forces in European rugby provided much of the launch pad for Ireland’s success internationally. They have consistently punched above their weight against clubs who have been assembled at sometimes vastly greater cost because of their localised sense of identity.

The core of their squads have not only been Irish, but from the province themselves. In many instances they are connected by school, club, families, city/town/village, friendships and more.

Foreign players and players from other provinces are embraced, and in turn embrace the local culture. But would there be a local culture without a continuing core of local players?

All politics is local, nowhere more so than Ireland, and ditto sports. When Ulster won the European Cup in 1999, 20 of their matchday 22 in the final were from the province. When Munster won the Heineken Cups of 2006 and 2008, those numbers were 17 and 16.

When Leinster emulated them in 2009, 17 of their 23 hailed from Leinster, in 2011 it was 15 and the following year it was 16, while 18 of their 23 for the win over Racing in Bilbao last month came from the province, and that’s not including the borderline case of Robbie Henshaw, who was a product of the Connacht system. (As an aside, Leinster weren’t complaining too loudly when he joined them.)

This is at the heart of the Irish sporting zeitgeist, witness the All-Ireland football and hurling championships, where the vast bulk of the squad and localised identity is further concentrated at inter-county level.

You hope that Nucifora gets this, that Ireland is not New Zealand.

“I absolutely get that. But in saying that, we are not New Zealand, you’re right, and we’re not trying to create a New Zealand system, let’s not get to a point where it becomes a handbrake or a hurdle for us. It’s got to work hand-in-hand with where we are all going.”

Schmidt and Stuart Lancaster have been among the coaching imports to have taken in All-Ireland games at Croke Park and, understandably, have been blown away by the experience. One hopes that Nucifora has too, and it might not do any harm if he took in a few provincial finals as well.

All roads lead to the 2019 World Cup, and Team Ireland is paramount.

We get that too. But if it was to come with a glorified draft system, and at the expense of the provinces’ innate identity, then it will come at too big a cost.