Wasps, Toulouse and Bath make up a tough Pool 1 of the Champions Cup 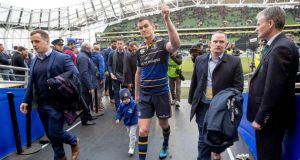 Jonathan Sexton acknowledges the crowd after the Champions Cup quarter-final against Wasps at the Aviva Stadium. Photograph: Morgan Treacy/Inpho

Leinster were drawn in what might be considered the Heineken Champions Cup pool of death for next season’s premier European competition.

In the draw, which took place in Lausanne, Switzerland on Wednesday, Munster in Pool 2, face this year’s Top 14 French champions Castres as well as Premiership sides Exeter and Gloucester.

It was Gloucester who suffered a 33-6 defeat against Munster in Limerick in what is now known as the miracle match in 2003.

The Irish side needed a four-try victory by a minimum margin of 27 points to reach the quarter-finals at Gloucester’s expense, which is exactly what happened.

Ulster, who earned a place in next season’s competition by virtue of beating Ospreys in a final playoff match at the end of last season, have been drawn against Welsh club Scarlets, French artistocrats Racing 92 and Leicester in Pool 4.

The draw for Pool 4 brings Donnacha Ryan and Simon Zebo back to Ireland to face Ulster. The former Munster secondrow, Ryan left for Racing 92 in May 2017, while Zebo announced his departure from Munster in January of this season and will line out for the Parisian club for the first time in the coming season.

1 Avoid the treadmill at all costs – marathon training in the 2km radius
2 Son Heung-min to carry out mandatory national service in South Korea
3 Reality Bites – Tales from the new normal: Shane O’Donnell
4 Sonia O’Sullivan: Taming The Tan gave us one last roll of the dice before shutdown
5 Rich Premier League clubs way off the mark in cutting staff pay
Real news has value SUBSCRIBE