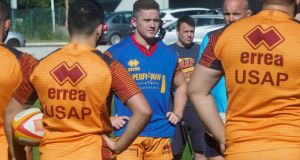 Jackson, who recently joined French Top 14 side Perpignan on a two-year deal, could line out against Connacht as early as October 12th for the opening week of European competition.

Two weekends in the month have been set aside for the European Challenge Cup and European Champions Cup fixtures. Both competitions begin that weekend.

Connacht were drawn in the same Pool as two French clubs, Perpignan and Bordeaux-Begles, as well as Premiership side Sale Sharks in Wednesday’s draw in Lausanne, Switzerland.

Jackson is rebuilding a career that was put on hold this season as he and former Ulster player Stuart Olding were involved in a 42-day rape trial in Belfast after which both players were cleared of all charges.

The exact dates for the matches have not yet been set by the European Professional Club Rugby (EPCR), and while Jackson and his team may not be drawn to play in Ireland on the first weekend, Perpignan will play in Galway at some stage throughout the pool phase of the tournament.

The 26-year-old outhalf, whose contract to play with Ireland and Ulster was revoked by the IRFU, recently joined up with his new club in the south of France and took part in his first training session on Tuesday.

“I want to find my best level quickly, I may be a little rusty but not too much,” Jackson told French newspaper ‘L’équipe’. “I will learn the culture of the team, I will recover ground and that’s good.”