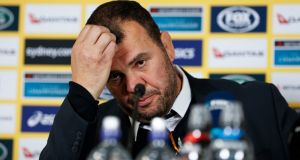 Australia head coach Michael Cheika dejected at the post-match press conference at ANZ Stadium, Sydney, after his side were beaten by the All Blacks. Photograph: David Neilson/Inpho

Australia’s media wasted little time in ramping up the pressure on Wallabies coach Michael Cheika after his side suffered another Rugby Championship thrashing by the All Blacks on Saturday to lose the Bledisloe Cup with a match to spare.

The 40-12 defeat at Eden Park ensured the All Blacks keep the trans-Tasman trophy for another 12 months, having won it back from Australia in 2003.

Cheika’s side have now lost six of their last seven games.

The Australian newspaper reported on Friday he had just three matches to win the support of governing body Rugby Australia and remain in charge for next year’s World Cup in Japan.

The 51-year-old had a testy exchange with one Australian rugby reporter post-match at Eden Park when questioned on his future.

“If you are naive enough to think that I’m worried about myself here, then you don’t know me at all,” said Cheika.

“The last person I’m thinking about is me. I want Australia to play good rugby, and be the best it can be. So if you think that I’m worried about myself then you’ve never known me.”

The Wallabies players, themselves, were not spared criticism after conceding six tries for a second successive week and having no answer to the world champions’ potent counter-attacks.

“Australia is showing no ability to contain the Kiwis, or even close the gap,” wrote the Daily Telegraph’s Jamie Pandaram.

“If anything, it is widening.

Despite the criticism, the Wallabies were again competitive for much of the first half and stifled the All Blacks’ attempts to attack from the first phase.

The return of tighthead Taniela Tupou from injury could force Cheika to consider him as a starting option, however, rather than using him off the bench.

The Wallabies also managed to expose the All Blacks on the counter themselves but could not finish off as they took poor options or were denied by the home side’s scrambling defence.

Cheika had some support from an unlikely source in counterpart Steve Hansen, who usually fires barbs across the Tasman Sea at the Wallabies.

“Because they lose to us, it doesn’t make them a poor team,” said Hansen.

“It’s a pretty special team down there in that change room,” he added of his side. “When the time comes in a few years . . . we will look back and think that’s a special group.

“I don’t think a coach should be under pressure for losing to us.”