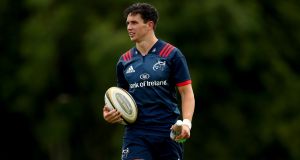 Joey Carbery. 'I think what’s important is the fact that people have recognised that Joey is a very good player, so he’s going to get time in the jersey,' said Ronan O’Gara. Photograph: James Crombie/Inpho

Ronan O’Gara can still scarcely conceal his excitement over the prospect of Joey Carbery playing in the same number 10 jersey the Munster legend himself wore with unequalled distinction for 16 seasons.

Carbery has even inherited the moniker “Rog” from his new teammates at the Munster High Performance Centre in the University of Limerick, to which the man himself quips with a wry smile: “Ah, sure, that’s a compliment.”

“It’s brilliant,” he says of Carbery signing for Munster. “I haven’t been as excited about it as this. I got a great buzz out of it because I played for Munster. Everyone backs Leinster if they’re from Leinster, but I back Munster because they’re the team I like. Genuinely, I think I could have been in Cork that day it was announced, and there was a big buzz. It’s big, you know? I think what’s most exciting is his age profile. He’s only going to get better.”

Given Carbery’s balanced running style, O’Gara is not the first or last to liken the New Zealand-born player to Beauden Barrett. “His acceleration is like Beauden Barrett’s. He obviously has a fair way to go if he wants to be World Player of the Year.

“You’ve seen a few of the images where he glides and he can change a game. It’s a great attribute to have. He needs to get better at his game management and that would be great for Munster because I think to earn the respect of the very knowledgeable Munster crowd, he’ll want to know how to manage a game.”

“He’s going to get more and more marked as well, so maybe the break isn’t for him, but he plays on the line so he can play inside or outside, or he can go through a hole. I think that try against Fiji, like, no other back could really have done that.”

Carbery will jump ahead of a posse of out-halves at Munster, namely Ian Keatley, the now Irish-qualified Tyler Bleyendaal, JJ Hanrahan and Bill Johnston, and O’Gara admitted: “It’s a very difficult one for the others. I would think that Tyler is a different case, because he’s been injured. I think the opportunities probably were presented to Keats and JJ and none of them have grabbed it, so they have to come back hard if they want, I would say, at best to back up Joey.

“But I think what’s important is the fact that people have recognised that Joey is a very good player, so he’s going to get time in the jersey. And you get better the more time you get in the number 10 jersey for Munster.

“So he needs to play games and if I was coach, it’s probably his to lose now. You have to give him the chance to grow, because he’s proven for Leinster and Ireland that the kid can play.”

After his first, successful campaign as assistant coach with the Crusaders in New Zealand, O’Gara is enjoying a rare, extended and “badly needed” off-season. He is currently in Dooks in Kerry on a family holiday with Jessica and the kids before the O’Garas return to Paris next Tuesday, as their five children are all still in the French school system.

He is not due back with the Crusaders until pre-season in early December, allowing him to be part of the rebranded Virgin Media television coverage of the Heineken Champions Cup as well as again being part of the Six Nations coverage for what was TV3.

O’Gara was among those in attendance at Virgin Media Television’s glitzy launch in the Aviva Stadium on Thursday, and as well as their extensive football coverage, Virgin Sport will have one European game every weekend, bridging a 12-year gap on Irish terrestrial TV since Munster’s Heineken Cup final win over Biarritz in 2006 was shown live on RTÉ.

Ireland’s record points-scorer is still basking in the glow of the Crusaders retaining their Super Rugby crown when securing their ninth title with a 37-18 win over the Lions in the final in Christchurch three weeks ago.

“It was great, it was fantastic. It reminded me a little of the Munster team I played with early on, in terms of a lot of leaders in the playing group. They just do it a little differently.” While it’s detailed, it’s not “robotic” and coaching messages are delivered to the team leaders and then relayed by them to the playing squad.

He’s been particularly struck by how well fringe players help the team prepare “on a consistent basis”. Having been troubled by thoughts of the Crusaders losing their title upon his arrival, he hailed the positive energy of head coach Scott Robertson.

“I got the backing of Razor [Robertson] and the manager over there, they liked what I was doing, they let me off and gave me my head, and my way of doing things.”

“One of Razor’s key phrases is ‘caring for each other’ and they put that into actions as opposed to saying it. So it’s very powerful when you’ve 40 guys that care for the fella they’re playing with. It’s, I think, what Munster was built on when we played. We cared for each other an awful lot.”

O’Gara had earlier spoken at the World Meeting of Families in the RDS alongside Olive Foley, widow of O’Gara’s Munster and Irish teammate Anthony Foley, who was given a standing ovation after an emotional speech about losing her husband.