Wallabies coach: ‘Last week it was turnovers that killed us. It was the same again’ 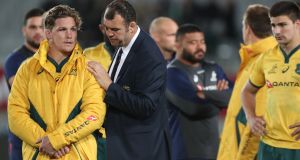 The level of frustration in Wallabies head coach Michael Cheika’s face was evident after his side were beaten 40-12 by the All Blacks in their Rugby Championship clash at Eden Park on Saturday.

His side had played well. Certainly better than last week’s 38-13 defeat in Sydney. The scrum was solid and provided the basis for their two tries by scrumhalf Will Genia and centre Reece Hodge.

Unfortunately, the All Blacks simply soaked up what they threw at them and put pressure back on the Wallabies, without really appearing to get out of third gear to retain the Bledisloe Cup with a match to spare.

For the second successive week, the world champions scored six tries, four in a record-setting performance by outhalf Beauden Barrett, and crossed for three more only to be ruled out on review by the television match official Marius Jonker.

“The same areas killed us, that’s turnover. Last week it was turnovers ... that killed us and it was the same again tonight,” Cheika said.

“When we do cough the ball up we do know they will come with it and you have to get up, work extra hard and get the ball back otherwise they will hurt you.

“The rest of the game we worked our butts off and it was those five or six key moments on turnover that really cost us.”

Cheika’s analysis could not have been more accurate.

His side held the ball and played in the right areas of the field more than the All Blacks, only for the world champions to sweep down field to score tries.

All four of Barrett’s tries came from broken play or his side sparking a counter-attack, with Ben Smith superb at exploiting space, while Joe Moody and Liam Squire were put over after their team mates hurled themselves at the Wallabies defenders time and time again.

Even disallowed tries by Barrett, his younger brother Jordie and Waisake Naholo, were generated from deep on defence, highlighting the willingness of their side to run when they saw opportunities to exploit tired legs.

“They play what is in front of them and we try to drum that into them,” All Blacks coach Steve Hansen said. “It doesn’t matter whether it’s from deep or not.

“If it’s on to run you have to run and we have players that can punish you when they do.”

Hansen was overall “pleased” with his side’s effort in over-running the Wallabies in the second half after they had been held for much of the first.

“They (the Wallabies) were better,” Hansen added. “They played particularly well and it took us a lot longer to get on top.

“It was an improvement from last week. We were a lot more accurate in some of the things we were doing. There’s still a lot of room for improvement, but we have to be incredibly pleased.”

Barrett’s four tries are an All Blacks record in a match against Australia, eclipsing Frank Mitchinson (1907), Tom Lynch (1913) and Henry Taylor (1914) who all scored three.

“When you hang out on the wing that’s what can happen,” Barrett said with a grin, downplaying the fact his first try had come from running a superb angle close to the breakdown and third by spotting a gap at halfway and accelerating through it. Barrett’s second try was scored just before halftime, from another scintillating counter-attack.

“It was a good test and was hard work in the first half,” Barrett added. “Scoring either side of halftime certainly helped us get momentum and slowly break them down.” Barrett almost added a fifth try, but it was ruled out by the television match official for a knock-on by Ardie Savea earlier in the movement.

“To be fair I wasn’t worried about that,” Barrett said. “It was more about finishing the game off strongly. I was not too worried about the scoreboard and was really interested in keeping on the pressure and dominating any way we could.

“I don’t know what the score was, it was good fun.”