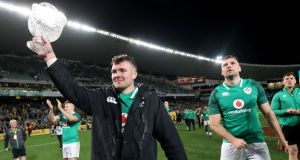 In the bowels of Sydney’s Allianz Stadium on June 23rd, the cheers had barely died down on Ireland’s come-from-behind series win in Australia to cap the mother of all seasons when even Joe Schmidt was a bit daunted by one jarring thought: how the heck do you follow that?

As the new 2018-19 season dawns, it remains just as pertinent a question for Irish rugby in general and the Irish and Leinster teams in particular. A Grand Slam and a series win down under made it Ireland’s best ever season. Throw in a European Champions Cup/Pro14 double, and ditto for Leinster.

Conceivably, an unbeaten season incorporating a second ever win over the almighty All Blacks in November and another Grand Slam, along with another Leinster double, would surpass even last season. But it is fairly unrealistic and, ventures Shane Horgan, possibly not even ideal in the build-up to next year’s World Cup.

Horgan, who will be a regular part of the Virgin Media coverage of the Heineken Champions Cup and 2018 Six Nations, also forecasts there might be a few more bumps along the way than was the case last season.

“Yeah, I don’t know if they can,” says Horgan with regard to Leinster repeating their historic double. “And this is the question about Irish rugby: is it repeatable? You’ve got to think it’s not repeatable, and whether that really affects things going into a World Cup.

“The same for Munster, and then I don’t think it’s a terrible year if you get to the semi-finals of two competitions and perform well, and possibly get beaten on the day by a better side, whether that be in Europe or in the Pro14.

“So what isn’t a great year for Leinster, is that if they qualify for both semi-finals and then don’t deliver a performance in one of those two games, that’s not really good because the bar is now so high for them. That, I think, is being fair to what Leinster can deliver. Not that they have to win two cups, but they should qualify for two knock-out stages and then deliver performances in them, and after that let’s see.”

On mature recollection, as they say in Irish presidential years, it was perhaps no bad thing that Ireland lost the first Test in Brisbane, or else they’d be weighed down with a long winning run and the challenge of eclipsing the 18-match world record jointly held by New Zealand and England.

In any event, as for Ireland winning all nine matches between now and Japan 2019, Horgan says: “I just don’t know if it’s possible that they’re going to go through unbeaten to the World Cup, or whether that would be a particularly healthy thing to do,” he adds with a rueful chuckle.

“It’s kind of like ‘let’s lose one of these along the way’. But if you’re looking at the situation now, at the start of the season, you go into the Six Nations next year, we have our two most difficult games [England and France], historically, here. If you say any one of the teams is going to win a Grand Slam right now, not knowing what goes on in the autumn, I’d say Ireland are the best positioned to do that.

“But that then means Ireland winning Grand Slams back to back, which seems kind of ridiculous given our history. So that expectation doesn’t align with history. But what maybe is the key factor here is what goes on in the autumn which I think could be a really useful time for Ireland to see who else they can blood.”

Describing last season as “a brilliant blooding year”, Horgan doubts whether Ireland can possibly unearth young players a la James Ryan and Jacob Stockdale, who were ever-presents in a Grand Slam.

“But, if you uncover somebody who hasn’t played a lot for Ireland already and they come into the squad, that’s a valuable enough autumn series. Then, you’ve got that prestige game against New Zealand and how winnable that game is, how high our performance is in that game,” says Horgan with regard to the All Blacks pulling away for a 38-13 win over Australia.

The meeting of the world’s top two ranked sides in November at the Aviva looms large.

“You kind of watched the game last week and it was, ‘okay, we can deal with this for long periods’. And, then, ‘oh no, we can’t do this’. I think we are capable of staying in that game for longer and delivering right the way through. I think we are. I’m not sure. It will be a good indicator as to what we can be. If we win or lose, it is not drastic. But, it is a useful indicator for us.”

Beyond that, with the World Cup specifically in mind, Horgan believes Ireland, no less than Leinster, can bully opponents, especially through the relentless accuracy of their work around the fringes. While he was particularly enthused by the manner Ireland won the second Test in Melbourne, he believes they regressed to win the third Test.

“I think Ireland’s talent and their coaching talent in delivering that is in their intellect and I think sometimes we can just leave that on the shelf too often. Because if we play it every week I think Ireland can be very dominant.”

Following that is still some task though.