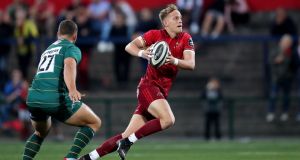 Prospects: Even if Beirne, a quality signing who gives them options, joins O’Mahony and CJ Stander on Test duty, Botha can help Chris Cloete and Tommy O’Donnell pick up the slack. New brands of rugby take time but if Carbery settles then, drawing inspiration from Limerick’s hurlers, Munster could even end a seven-year trophy draught. Need to up away form.

Prospects: Allowing for Muldoon’s huge loss, if Copeland stays healthy and maintains form alongside the highly accomplished Butler, Ultan Dillane rediscovers his best, Jack Carty (or David Horwitz) lands his kicks, they could challenge for the playoffs. Only one away win last season, but have renewed spirit, along with home form and firepower out wide.

Overview: A strong finish to last season saw them win the Challenge Cup in Bilbao and return to this season’s Heineken Cup. Now under a new head coach and although Sam Warburton and Taufa’ao Filise have retired, and Alex Cuthbert has moved on, signing Molodvan prop Dimitri Arhip from the Ospreys looks a coup.

Prospects: May get a temporary bump from a new coaching ticket headed by Australian John Mulvihill, and it will be interesting to see how the once brilliant 33-year-old US Eagles star Samu Manoa goes. A 38-10 defeat to Exeter last week doesn’t augur too well and it’s hard to see significant improvement this season.

Overview: Brought some exciting rugby in their debut season, especially in the more rarefied air of Bloemfontein, helped it has to be said by some questionable refereeing, they won eight of 10 games. But the flip side was their travelling travail, with two of their away wins against the Kings. Respectable quarter-finalists.

Prospects: There have been 26 new signings, and counting, mostly from within. But some of the 18 through the exit door look the more eye-catching – Francois Venter, Johan Goosen, Uzair Cassiem and Clayton Blometjies and last season’s leading points scorer Fred Zelinga. Travel schedule and instability won’t help progress.

Overview: Accumulated 49 out of a possible 50 points on their artificial Scotstoun surface last season, but after a cracking start fell away sharply. Filleted by the Scarlets in semis, they have since lost Finn Russell, a key man in their high -tempo, running and offloading game, to Racing.

Prospects: Should in theory progress further under Rennie. Not too much change in personnel, with Aussie scrumhalf Nick Frisby replacing the departed Henry Pyrgos, and Russell’s exit offering the chance to further develop 21-year-old Andy Hastings, son of Gavin. Remain front-runners along with Munster in this conference.

Overview: Once were kings but a season of upheaval ended with fifth-placed finish and a playoff defeat away to Ulster, more unforgettable rugby, not one solitary win outside Wales and the departure of Rhys Webb and Dan Biggar to the Top 14. Clarke has acquired George North (unlikely to play too often) and Scott Williams.

Prospects: Given Alun Wyn Jones’s Test duties and Dmitri Arhip’s departure they again look underpowered up front. So unless Scarlets signing Aled Davies and Sam Davies really fire in the absence of Webb and Biggar at halfback, it’s hard to see the Ospreys taking flight.

Overview: On the verge of extinction just over a year ago, they propped up Conference A as anticipated, but Zebre performed creditably in their first year under Michael Bradley, winning a record seven matches including a double over his former employers Connacht.

Prospects: A relatively small turnover in personnel, with a modest-looking intake, but Bradley, Carlo Orlandi and Alessandro Troncon believe they can make further improvements with a largely unchanged squad and, what’s more, fulfil Bradley’s target of challenging for a playoff place. That would be a remarkable achievement.

Overview: The competition’s standard-bearers. Home semi-finalists all but once since playoffs were introduced eight seasons ago, justified favouritism last season with a third title in six seasons, and fifth overall, despite backboning a Grand Slam and winning European Cup. Isa Nacewa and Jamie Heaslip have retired, and of course Joey Carbery has moved on along with Jordi Murphy.

Prospects: The more physical Joe Tomane is not a like for like replacement for Nacewa (a class and durable act) and outhalf could be problematic, as Carbery’s departure places bigger emphasis on the wellbeing of Ross Byrne. But Josh van der Flier, Rhys Ruddock and Seán O’Brien should all come back, and the Academy system just keeps producing.

Overview: An horrendous season represented something of an annus horribilis, certainly off the pitch, which was ultimately salvaged by winning a playoff against the Ospreys. An entire backline effectively departed and a third head coach was appointed. Yet the expectations of the Pro14’s second biggest home support remain.

Prospects: Resolving SRU rift to bring in McFarland was a boon. He has an impressive CV and knows the Pro14 landscape. If Billy Burns fills the Paddy Jackson void (a big ‘if’) and Marcell Coetzee avoids injury, Ulster cold even feel liberated. Chasing down Cardiff for third looks a realistic if ultimate objective.

Overview: A superb culture under a settled coaching team, and as the last two seasons has shown – final and semi-final – their brand of rugby flourishes in end of season conditions. They also showed they had more oomph up front and defensive resolve, until they twice ran into Leinster at the Aviva.

Prospects: Have lost John Barclay’s leadership, and the ever-present, ever-dependable Tadhg Beirne, while Aaron Shingler is out until January. Although Uzair Cassiem (and Clayton Blometjies, two tries on pre-season debut) have joined, as well as Maori All Black Blade Thomson, squad looks a tad diminished. But with Rhys Patchell at ‘10’, should again duel with Leinster for home semi.

Overview: For the first time ever they won more matches than they lost over the season, finishing only seven points behind Ulster, and were consistently competitive – with seven one-score wins and five losing bonus points. In truth, consolidating that under Kieran Crowley would be an achievement.

Prospects: Scrumhalf Dewaldt Duvenage looks a good signing from the Stormers, but their Kiwi outhalf Marty Banks has moved on to Japan after a prolific and productive year, though this could mean more game time for Ian McKinley. May not go too far backwards or forwards.

Overview: Bernard Jackman took last season (the Dragons’ worst ever with just two home wins over Connacht and the Kings) on the chin. Have re-emerged under new chairman with 20 players released and 14 signed, including Ross Moriarty and Richard Hibbard (albeit now 34), which in turn raises the bar.

Overview: Cockerill added real bite last season, when Edinburgh were the most improved team in the competition, going from six wins in 22 games to 15 in 21. This time last year they were 175-1, which shows both how much progress was made and how much more expectation there will be this season

Overview: Cobbled together at short notice a year ago, they managed one win (at home to the Dragons) in 21 games. Whereupon there’s been another mass turnover in personnel, with 25-plus players gone, and another glut of new arrivals after new investment by Isuzu Motors and a local consortium.

Prospects: Their squad still looks both inexpensively and hastily assembled, and while they may get one or two more results in Port Elizabeth it’s hard to see significant improvements for the time being, especially on their demanding travels.